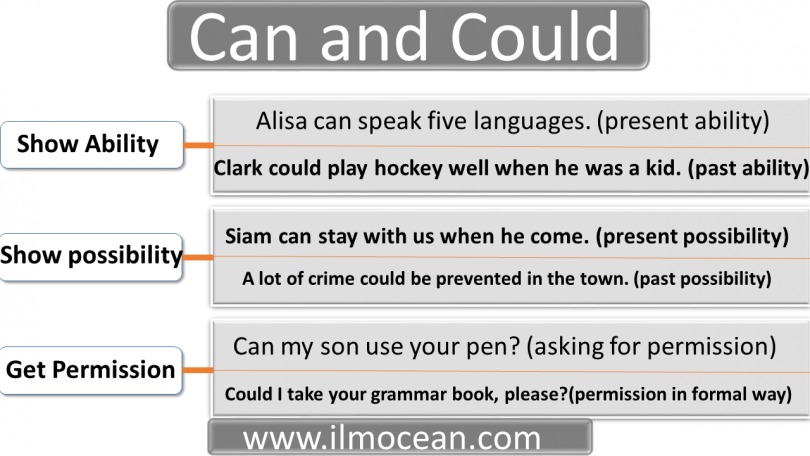 Correct use of CAN and COULD

Common Structures of CAN and COULD in a Sentence is given below.

POSITIVE SENTENCES (+):  Subject + CAN or COULD + Verb (with first form of the verb)

NEGATIVE SENTENCES (-): Subject + CAN or COULD + NOT + Verb (with first form of the verb)

INTERROGATIVE SENTENCES (?): CAN or COULD+ Subject + Verb (with first form of the verb )

Note: we use first form of verb with can and could

Use of CAN and COULD

CAN is used to describe that someone has the ability to do any task given to him. ( Ability which is present )

COULD is used to describe that someone has the ability to do something in the past. ( use in past Ability ) 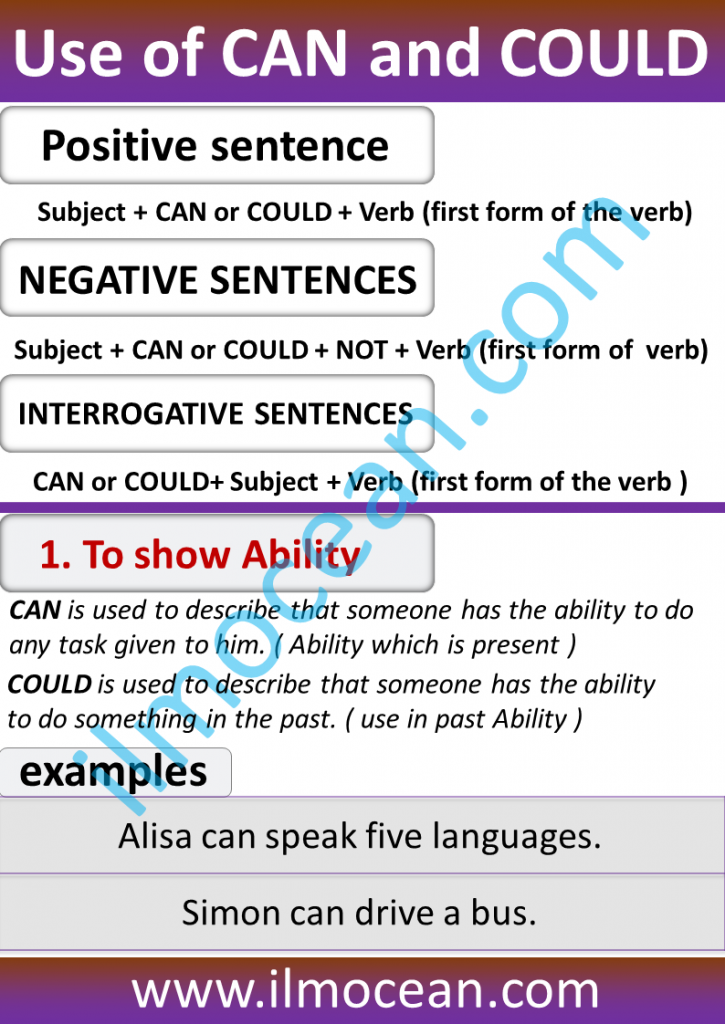 When we have to show that something is possible then we use CAN. It is used to show present possibility.

On the other hand when we have to describe something that is possible in past then we use COULD.

When we want to get permission for something we use CAN. This is informal permission.

COULD is used to get permission in formal way. This is the most polite way to ask for permission for something. “COULD” is more formal and polite as compared to “CAN”. (Asking for Polite Permission)

COULD is also used in a question as we use CAN. Question is not a real one because we ask somebody to fulfil our request in a polite way. When we use “COULD” its mean it is formal and polite request. (A Polite Request)

When we offers some help to someone or want to do something for someone, we use CAN. (It is called Informal Offer)

On the other hand, COULD is used when we want to make a suggestion. (For Suggestion)

Cannot is used in negative sentences. (When we are sure about something that is not true or something is surprising for us in a sentence)

(This sentence shows that someone is sure that it isn’t raining because the sun is shining and sky is clear.)

When something is not allowed, it is called negative saying.

Could not is used in negative sentences. It is used when something is impossible or not true.

(This sentences means that it’s not or it might not be possible for Warner to buy house even in future due to poverty.)

When someone is talking about past times in form of conditional sentences, we use “could” in palace of “can”.