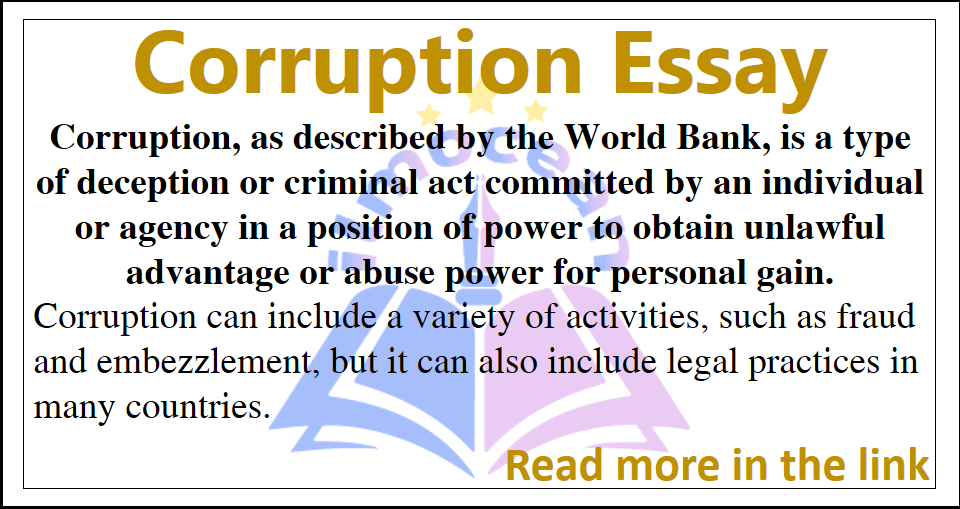 Corruption, as described by the World Bank, is a type of deception or criminal act committed by an individual or agency in a position of power to obtain unlawful advantage or abuse power for personal gain. Corruption can include a variety of activities, such as fraud and embezzlement, but it can also include legal practices in many countries. Corruption undermines trust, weakens democracy, stifles economic development, and aggravates social inequalities, impoverishment, class division, and environmental catastrophe. Corruption is a scourge that is wreaking havoc on the nation’s foundations. In a nutshell, corruption occurs when a person in authority intends to exploit his or her position to enrich himself or herself. A dishonest person takes a lot of kickbacks from people and then does unlawful work in exchange.

Corruption is a controversial issue because it is an obscured manifestation in our democracies. Both parties involved in a power-for-privileges exchange want to keep their transaction private. As a result, determining how widespread and pervasive corruption is in our economy and social life is extremely difficult.

Let’s take a closer look at some of the characteristics.

There have been widespread complaints about politicians and public officials accepting bribes and enriching themselves privately at the expense of the common citizen. This could be at the expense of the employee and the employer; the consumer and the producer; the renter and the tenant; or the person requesting a permit to do something or requesting an exemption from an obligation to pay or deliver a product or service. All of these instances may be considered abuses of power and authority for one’s benefit.

Every society knows, whether explicitly or privately, which public officials are open to financial transactions reciprocal gifts. The official’s gift could then imply giving a priority to an application or awarding a contract, scholarship, or employment. The potential payer will seek his “prey”; he will seek the politician/public official who everyone knows can be “decided to buy,” that he is ready to violate the rules in exchange for a “gift.” As a result, a public official’s or politician’s reputation is extremely important.

The Lubricant of Society:

If corruption is evaluated solely on the basis of business economics, it costs society money, which should be deemed a loss. From a microeconomic standpoint, it is profitable for the blackmailing entrepreneur. A bribe payer secures a desired transaction that, strictly speaking, should have been assigned to someone else if evaluated solely on commercial grounds. Individual entrepreneurs and transactions will suffer, as will the national and global economies.

The fact that either the payer or the receiver of kickbacks like to keep their actions hidden demonstrates that such actions is widely regarded as improper. Many people regard corruption to be an ethical issue, as well as a cognitive issue. And refer to it as a “sinful” or “wrongdoing.” It is a problem that can be solved through personal reform.

First and foremost, bribery is now the most prevalent form of corruption. Bribery is the inappropriate use of favors and gifts in return for self-benefit. Cash, gifts, shares in companies, sexual favors, job opportunities, amusement, and political gains are examples of favors.

It is defined as the act of exempting assets to steal them. Besides that, it is carried out by one or more people who have been appointed with these assets. Ultimately, embezzlement is a form of financial forgery.

The graft is a type of corruption that occurs on a global scale. Most notably, it refers to the unauthorized use of a politician’s power for personal benefit. Moreover, trying to divert public funds for the advantage of politicians is a common form of graft.

Another common form of corruption is extortion. It refers to the illegal acquisition of property, money, or services. Most importantly, this is accomplished through the coercion of individuals or organizations. As a result, extortion and blackmail are very similar.

Nepotism is an ancient form of corruption that is still in use today. This refers to a person giving preference to one’s relatives and friends for jobs. This is unquestionably an unjust practice. This is due to the fact that many qualified candidates are turned down for positions.

Another method of corruption is the abuse of discretion. In this case, a person abuses his or her power and authority. A judge dismissing a criminal’s case unfairly is one example.

Corruption has been one of Pakistan’s most significant challenges since its independence. Despite the reality that various institutions deal with corruption, it is difficult to keep corruption under control. Bribery is one form of corruption that is prevalent in our society. Many anti-corruption institutions have been working for years to combat corruption, but Pakistanis remain dissatisfied with the judiciary system. Furthermore, the predicament is widespread, with the middle class bearing the brunt of the burden. In 2002, an anti-corruption strategy was developed with the goal of developing a comprehensive plan for controlling corruption. Furthermore, the National Accountability Bureau (NAB) has the authority to prosecute and investigate cases. The major impediment, however, is the unpredictable nature of anti-corruption efforts and a lack of political will.

Pakistanis face numerous challenges as a result of their country’s corruption. Many people living outside of Pakistan are also subjected to criticism. Pakistan’s current government has taken the initiative to combat corruption and has evaluated the procedures.

Causes of Corruption in Pakistan:

It has been observed that corruption diminishes opportunities and promotes inequality. If we look back over the years, we can see that corruption has caused unemployment, starvation, impoverishment, and prejudice in Pakistan. People are succumbing to hopelessness. Committing fraud is becoming more common and widespread. As a result, corruption pervades all levels of government and business.

Corruption is among the most persistent issues in the world, particularly in third-world countries, where it has become so entrenched in government institutions that it cannot be easily eradicated due to the stakes of powerful civil servants and crooked leaders.

Corruption will not be tolerated in society till the worthy people are given their due. It is everyone’s responsibility to work together with government institutions to make a corruption-free country.