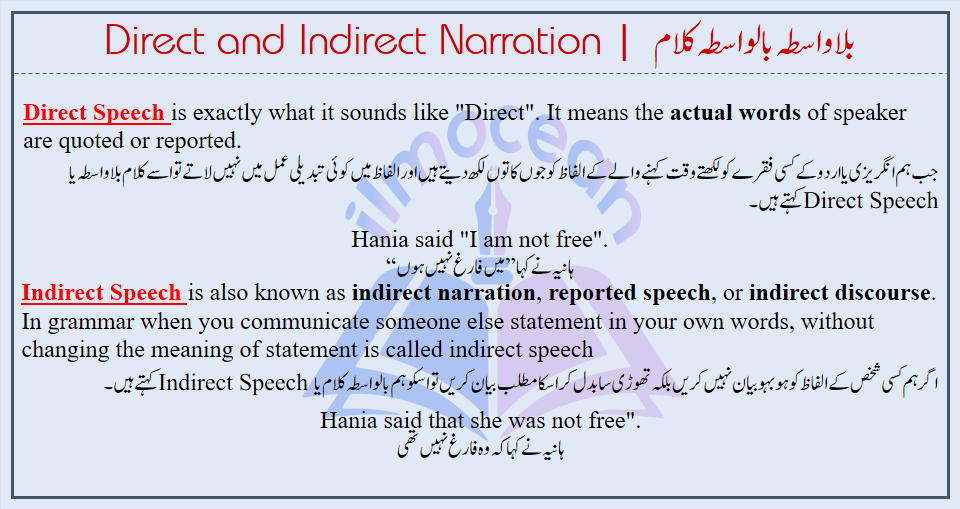 In this lecture we are going to learn:

Before direct/indirect, you need to know where from these terms comes. In our daily life we convey the messages of each other. The technique of reporting or delivering the words of a speaker is called Narration.

For example, you are at your class and Mr. Jam, who is your teacher says, “I want to meet your Parent”. When you come home, you will inform your parents in two ways:

Direct: Ahmad said, “I want to meet your parents.”

Indirect: Ahmad said that he wanted to meet my parents.

So, there are two main ways of communicate the words of a speaker.

Direct speech is exactly what it sounds like “Direct”. It means the actual words of speaker are quoted or reported. It is often enclosed in quotation marks so that the reader understands that the quoted text is the speaker’s original statement. As it uses the exact words of the speaker so Direct Speech is also called a quoted speech.

Example: Hania says “Today, I am not free”.

Indirect speech is also known as indirect narration, reported speech, or indirect discourse. In grammar when you communicate someone else statement in your own words, without changing the meaning of statement is called indirect speech. In this form, the actual words of  speaker are converted and said/written in a simple manner.

Example: Hania said “Today, she is not free.”

“Hania said that she is not free.”

In direct speech is always a comma or colon after said (,) and other part of sentence (spoken words) are written in inverted or quotation marks (” “).

In indirect speech, the comma replaced with (that) and spoken words are not written in inverted commas nor quoted.

Indirect: He says that he wants to adopt a cat.

Advantages and Disadvantages of Internet

Before conversion rules, you must memorize the different parts of direct speech.

In the above example:

Indirect: Hania told me that she is very busy then.

Rule No 1 : Speaker words are not written in inverted commas. (Hania told me that she is very busy then.)

Rule No 2: Use of conjunction: Remove the inverted comma from direct speech into proper conjunction e.g., that. (Hania told me that she is very busy then)

Jam said that he was ill.

Isha says that she is pretty.

Rule No 3: change in pronoun:

Rohan will say that he is tall.

They said that they are going for movie.

Rule No 4: change in tense:

Isha said that she walked.

Ali said that he was having tea.

Maham said that Honey had left for school.

He said the he ate two apples.

Ramesh said that he would go to Sri Lanka.

Ravi asked me what Heena was doing.

Iffa told me that she likes my home.