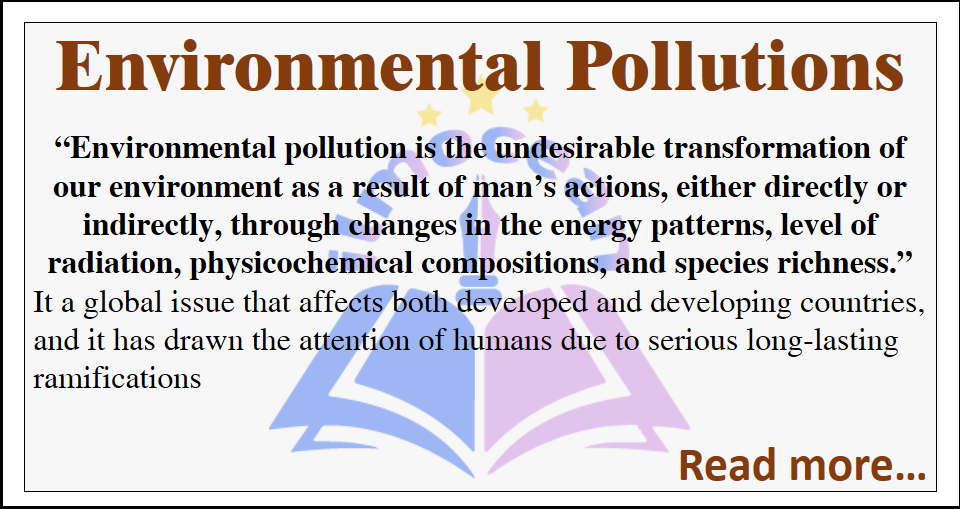 Environmental pollution is the undesirable transformation of our environment as a result of man’s actions, either directly or indirectly, through changes in the energy patterns, level of radiation, physicochemical compositions, and species richness. It a global issue that affects both developed and developing countries, and it has drawn the attention of humans due to serious long-lasting ramifications. Today, environmental pollution is a serious threat the human race on earth. As we move towards globalization, there is a rapid increase in industrialization and technological improvements, which emit toxic fumes and chemicals into the air as well as water, affecting land, air, and eventually the life of species.

Pollution is a major problem that has been affecting our planet. Even though countries have taken various steps to mitigate these effects, there still is a long way to go. It has wreaked havoc on several cities around the world. Most of these polluted cities are in Pakistan as well. Karachi, Faisalabad, Lahore are among Pakistan’s most polluted cities. The air quality in these areas is destitute and there have been indications of land and water pollution. It is now up to the administrations of these cities to devise strategies to address these issues.

Several natural processes and cycles are disrupted as a result of this. Not only that, but many species of plants and animals are now extinct and harmed. Animals are losing the ecosystem at an alarming rate as a consequence of a rapid increase in pollution.

Environmental pollution is basically of the following types:

It is primarily caused by the emission of gas from automobiles. Toxic gases are produced as a potential source in manufacturing plants, by openly burning toxic substances such as PVC, vehicle exhausts by chlorofluorocarbons used in refrigerators, and so on.

The number of vehicles has increased on roads of Pakistan. These vehicles emit Sulphur dioxide and carbon monoxide. These gases are to blame for the decrease in the amount of oxygen in the atmosphere. They also cause respiratory problems, tumor, and other health issues.

It is yet another major challenge that humans face today. Industrial effluents and other wastes are now being directly thrown in water courses, rivers, and oceans. This has led to a loss of habitat for aquatic life, as well as a decrease in the amount of dissolved oxygen in water reservoirs.

A major consequence of water pollution is the scarcity of portable water. Individuals are compelled to drink polluted water, which causes diseases like cholera, diarrhea, and dysentery.

Contributing to air pollution, vehicles on the road also cause noise pollution. This is affecting those who live in cities and near roadways. It tends to cause stress and tension issues in people such as anxiety.

Aside from this, noise pollution is caused by the bursting of fireworks, music played on microphones, and operations of factories, particularly during the season of festivals. If not managed properly, it can harm brain functions.

Pakistan is an agricultural country. Farmers used a variety of herbicides, fertilizers, and many other chemicals for the growth of plants. This pollutes the soil and renders it unsuitable for crop cultivation aside from that if the government officials don’t dispose of industrial effluents that are left on the ground, this contributes to pollution.

Although these are the major four types of pollution, radioactive and light pollution is the results of lifestyle changes that also have hazardous effects on the environment.

Oil spillage leading to the release of industrial effluents and liquid petroleum hydrocarbons into the environment, particularly the marine ecosystem. An Oil spills can have far-reaching consequences, which are frequently portrayed in the media as long-term environmental problems. Such notions are recognizable, given that images of oiled birds and wildlife are frequently used to fuel them.

Industrial waste is defined as wastes produced by industrial operations and involves any material lest unusable during the process of manufacturing such as that of industries, foundries, and mining companies. It can affect the soil and water reservoirs and contaminate lakes and rivers thus hazardous for marine life and other living organisms.

Exhaust gas, also known as fuel gas is generated by the combustion of natural gas, petrol, diesel, or coal. Vehicle emissions pollute the atmosphere are a major contributor to the formation of smog in various cities. It causes the death of many people every people.

The major cause of environmental pollution nowadays is the careless attitude of the public towards the cleanliness of the atmosphere. People are discharging their house wastes into streets, pipes which disturbs the drainage system. Moreover, the visiting places such as parks and hill stations are full of ruins and wrappers which affect the beauty and cleanliness.

Agriculture waste is produced by numerous agricultural activities. Fertilizers and other wastes from plantations, poultry farms, and pesticides run off and enters soil and water due to rain causes hazardous effects.

Nature plays a significant role in environmental pollution as well. Natural causes include earthquakes, volcanos, forest fire, and dust storm can cause pollution on large scale.

The causes of environmental pollution are not limited. If check and balance is not maintained and proper measures have not applied the life on earth could be difficult on a harmful level. It also has a strong negative impact on an individual’s health. It must be taken seriously for the health of our coming generations. It is a non-curable disease but it is preventable by care and consciousness. Industrial wastes should be thrown in places far from residential areas and water bodies and contaminate properly.