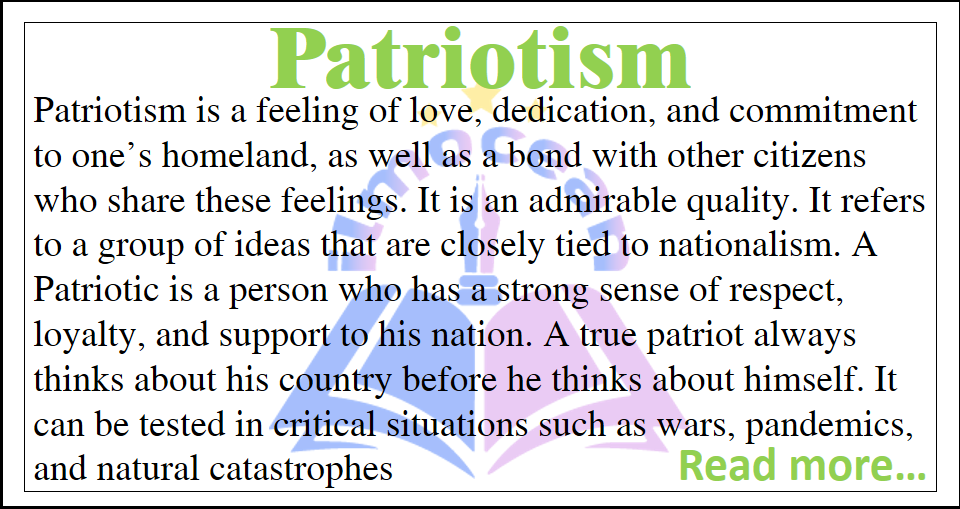 Patriotism is a feeling of love, dedication, and commitment to one’s homeland, as well as a bond with other citizens who share these feelings.it is an admirable quality. It refers to a group of ideas that are closely tied to nationalism. A Patriotic is a person who has a strong sense of respect, loyalty, and support to his nation. A true patriot always thinks about his country before he thinks about himself. It can be tested in critical situations such as wars, pandemics, and natural catastrophes. Patriotism motivates a person to act justly and fairly in the interests of the country’s well-being and improvement. True affection and thinking for a country’s progress is patriotism.

During the British rule over the subcontinent, several people have battled for Pakistan or even gave their lives. Some continued to fight for their nation with the same zeal and laid down their lives to defend their homeland from intruders. Some sacrifice their properties and lands. Most lost their loved ones during the partition, but they never get disappointed and followed the teachings of Quaid-e-Azam Muhammad Ali Jinnah, the founder of Pakistan. Liaquat Ali Khan, Maulana Muhammad Ali Johar, Allama Muhammad Iqbal, Sir Syed Ahmed Khan, and many others were true patriots of the history that invoked the sense of patriotism in other Muslims and to consider Pakistan as the Motherland.

Patriotism is essential for the country’s progress and independence and our freedom fighters were the outstanding examples of this. Patriots adore their lives to ensuring well-being of the nation. Our country, Pakistan is impoverished and underdeveloped. It is facing many issues. We must show patriotism to solve these challenges and make the country, a prosperous one. The importance of patriotism cannot be overstated. The feeling must be instilled in the country’s youngsters for them to function as responsible citizens. Youth are the nation’s future, and for the country’s bright future, they must defend their country and make it able to shine.

There are five different types of patriotism, each of which must be considered on its merits.

This kind of patriotism is uncommon, but not unheard of. Leaders and policymakers use it frequently when their nation’s interests are deemed to be at risk. It is summarized in the phrase “our nation, right or wrong” at least in its most basic and obvious interpretation. There is not much to say about this type of patriotism as it amounts to a moral rejection. It is impossible for “our country, right or wrong” to be correct.

This kind of patriotism is critical and rational. Patriotic loyalty is directed towards one’s nation, it does not indicate that a patriot will support any government in power. A Robust patriot may encourage his country’s interests in a critical manner.

This patriotism is moderate in a number of different but related ways it isn’t boundless. It forbids a patriot from promoting his nation’s interest in any type of situation. It recognizes the limitations that morality places on our ability to achieve societal goals.

Deflated patriots obey the laws of the nation and promote citizenship. They prioritize their duties to make their nation a welfare state.

It includes the moral and ethical flourishing of the country. Ethical patriots want to see justice done, rights protected, and human solidarity at any place.

How does it work?

The sense of patriotism is progressively fading these days, as today’s youth do not feel as strongly about their nation as previous generations did.

Parents and teachers need to work to create a spirit for patriotism in coming generations. They must instill a sense of patriotism and encourage the youth to love their country and try to make their country a progressive one. A country whose youth love it and are eager to improve its social and economic conditions would have a better chance of going and thriving. We should have respect and affection not just for our country but also for other nations to have peaceful relations and to prevent conflicts.

True and a fake patriot:

A person appears to be a true patriot who is willing to put his career and anything on the line of his nation. The fate of a country is in the hands of its leadership. Whether or not, the rulers appear to be a true patriot, they consider the nation’s interest as well as the people. They will continue to do so for the betterment of the country. A nationalist prioritizes the value of the land over his own interests.

However there some fake patriots out there. They simply enjoy taking unfair advantage of the circumstance. They are folks who lacked both faith and character. They are self-centered and can cause harm to a nation’s prosperity.

Patriotism that exceeds the limits of reasons might result in battles with other countries. A common example in history of this type of patriotism is the world-war II, which occurs due to Hitler’s violent patriotism.

Patriotism may cause us to be unjust and unfair in our perception of others. Every nation has its unique qualities and specialties. Every country has made significant contributions to the advancement of human civilization. Even though a country is very small, it is unwise to dismiss it.

The Reward of a Patriot:

A true patriot serves his motherland and dies for it. He was admired and cherished throughout his life and after his death. That type of nationalist is inevitable. Among these are, Allama Muhammad Iqbal, Quaid-e-Azam, and many others who served Pakistan with great zeal.

No doubt, a comprehensive discussion of patriotism is beyond the scope of this essay. Patriotism is the purest feeling that can never be taught or spoon-fed. A person develops this on his own. A patriot not only thinks about himself but also for the cause of other nations. He must believe in the well-being of humanity.