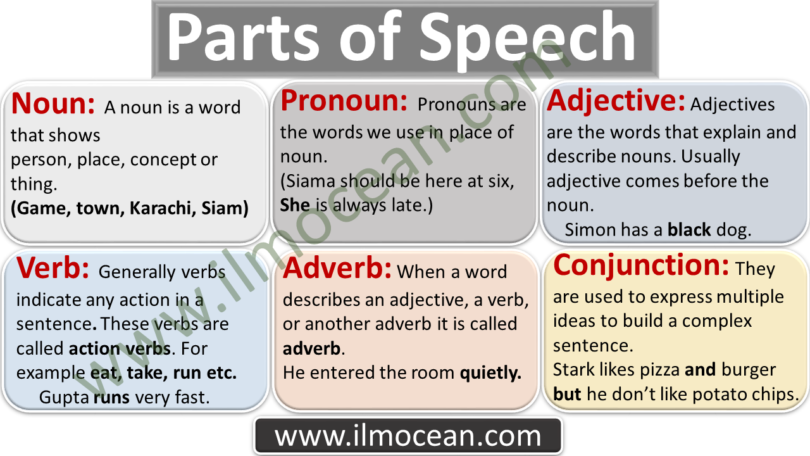 In the English language, there are eight parts of speech: noun, pronoun, adjective, preposition, verb,  adverb,  interjection and conjunction. The parts of speech shows how the word functions in meaning and its grammatical role within the sentence. An individual word work as more than one part of speech when it is used in different circumstances. It is very important to understand parts of speech for determining the correct definition of a word when using the dictionary.

There are eight main parts of speech.

The eight parts of speech

A noun is a word that shows a person, place, concept, or thing. Simply, anything that is present in this universe (visible or invisible) is called a noun. For example a cricket ground, Mexico, or sunlight. 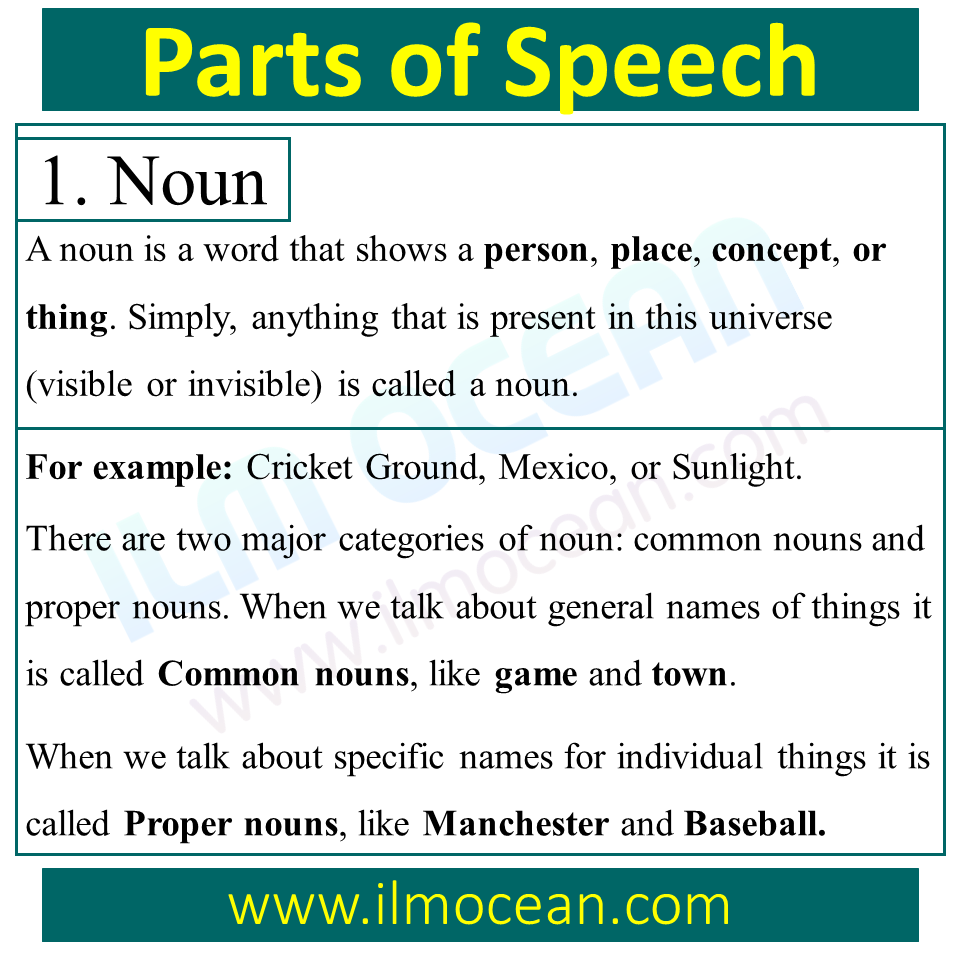 Pronouns are the words we use in place of noun. When a pronoun is used for specific noun the reader or listener understands which specific noun you’re pointing out.

For example “Siama should be here at six,” now look it “She is always late; next time I’ll tell her to be here an-hour earlier.”

Instead of saying Katherine’s name three times in a sentence, you replaced it with she and her and in this way your sentence remained grammatically correct. 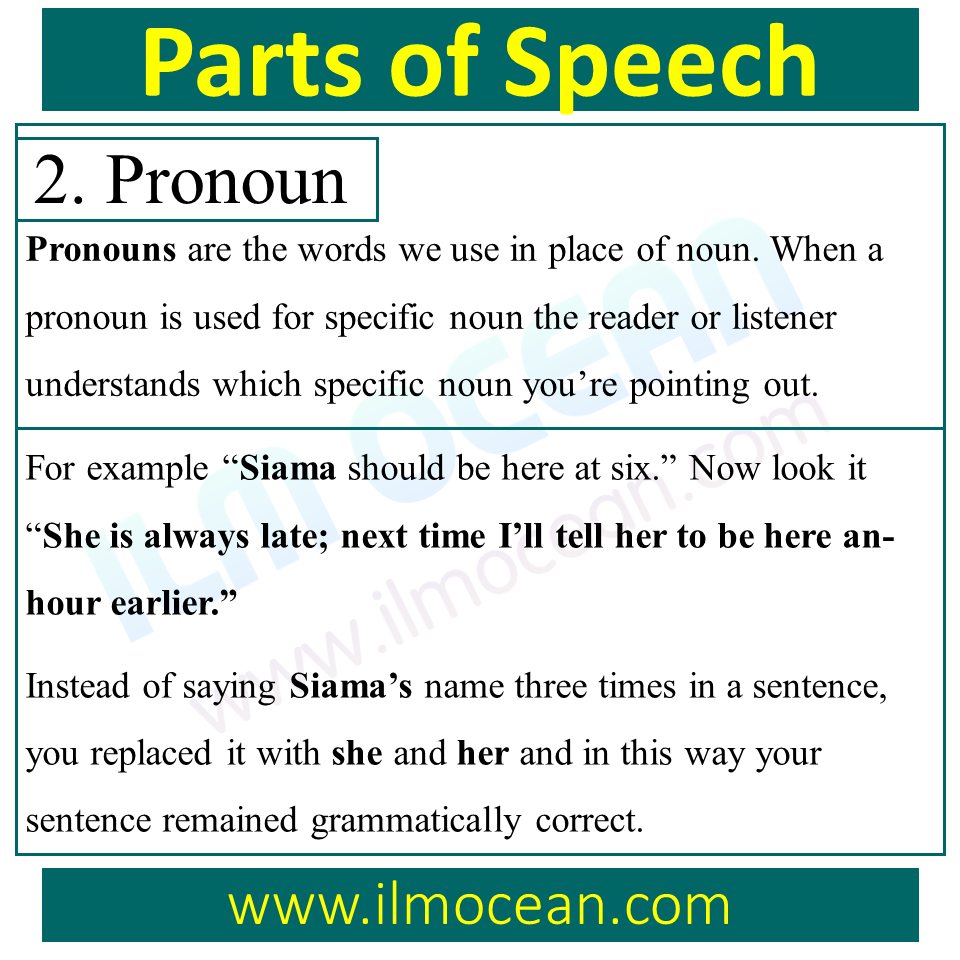 Adjectives are the words that explain and describe nouns. Just think about your favorite drama. How would you tell to your friend who has never seen it?

You will say the movie was funny, interesting, well-directed, or full of action. When the movie is described with these words, you’re using adjectives. Usually adjective comes before the noun it is describing (Simon has a black dog), Sometimes, adjectives come at the end of a sentence (Simon’s dog is black). 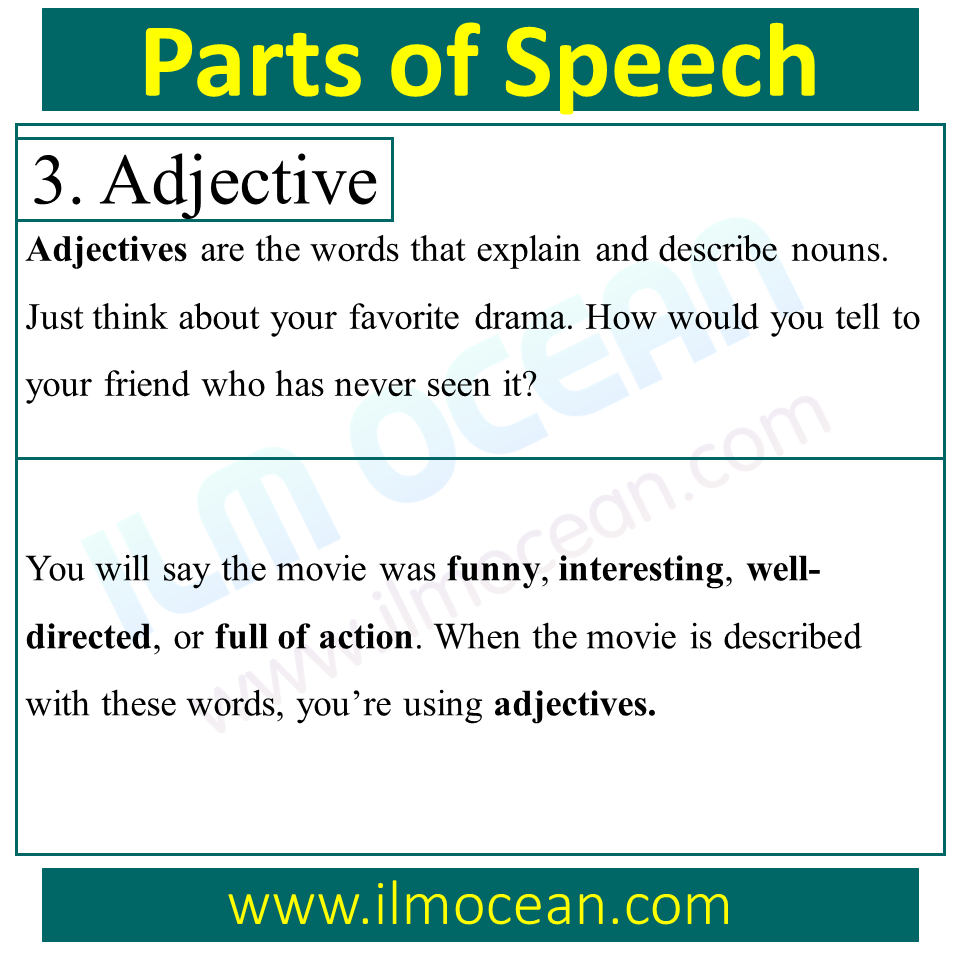 Generally verbs indicate any action in a sentence. These verbs are called action verbs. There are many examples of verbs such as eat, take, run etc.

Verbs also show some action or states of being. For example to love and to be. These verbs are called non action verbs. 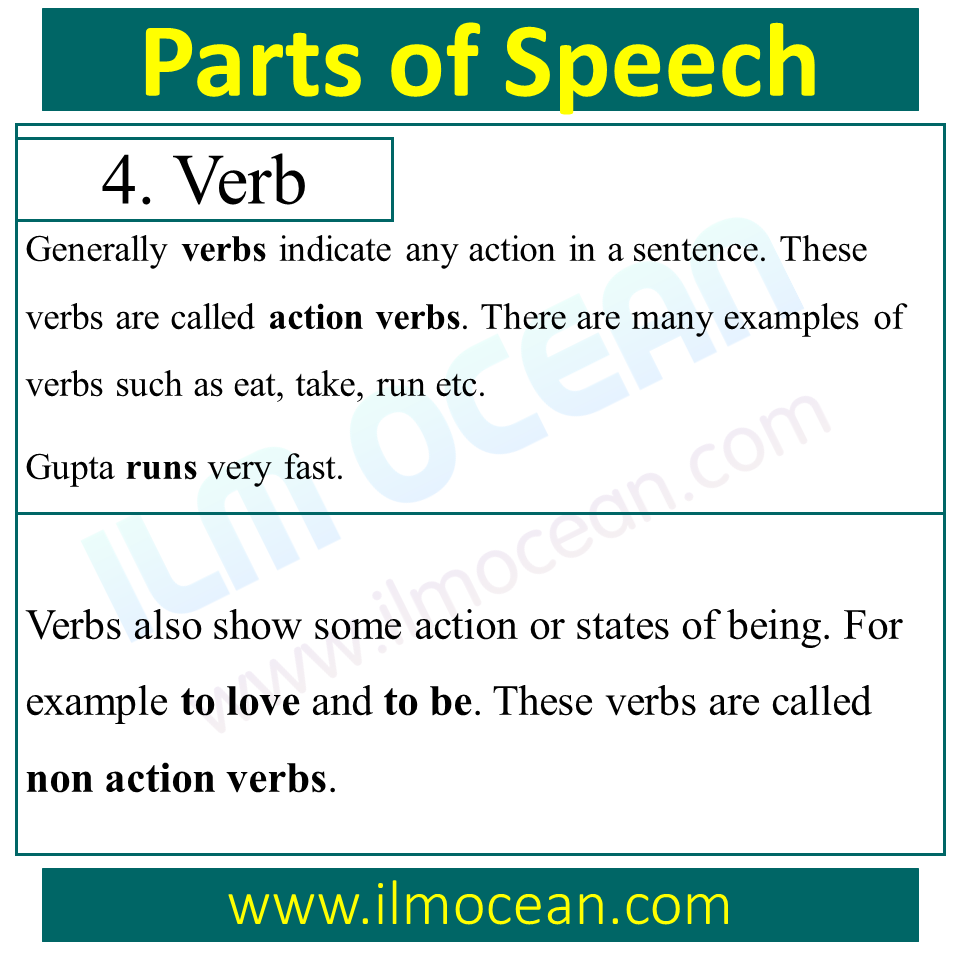 When a word describes an adjective, a verb, or another adverb it is called adverb. We will explain it by examples:

Here quietly is describing how Musa entered the room.

A cheetah is always faster than every animal.

In this example. Always is showing how frequently a cheetah is faster (adjective) than any other animal on the earth. 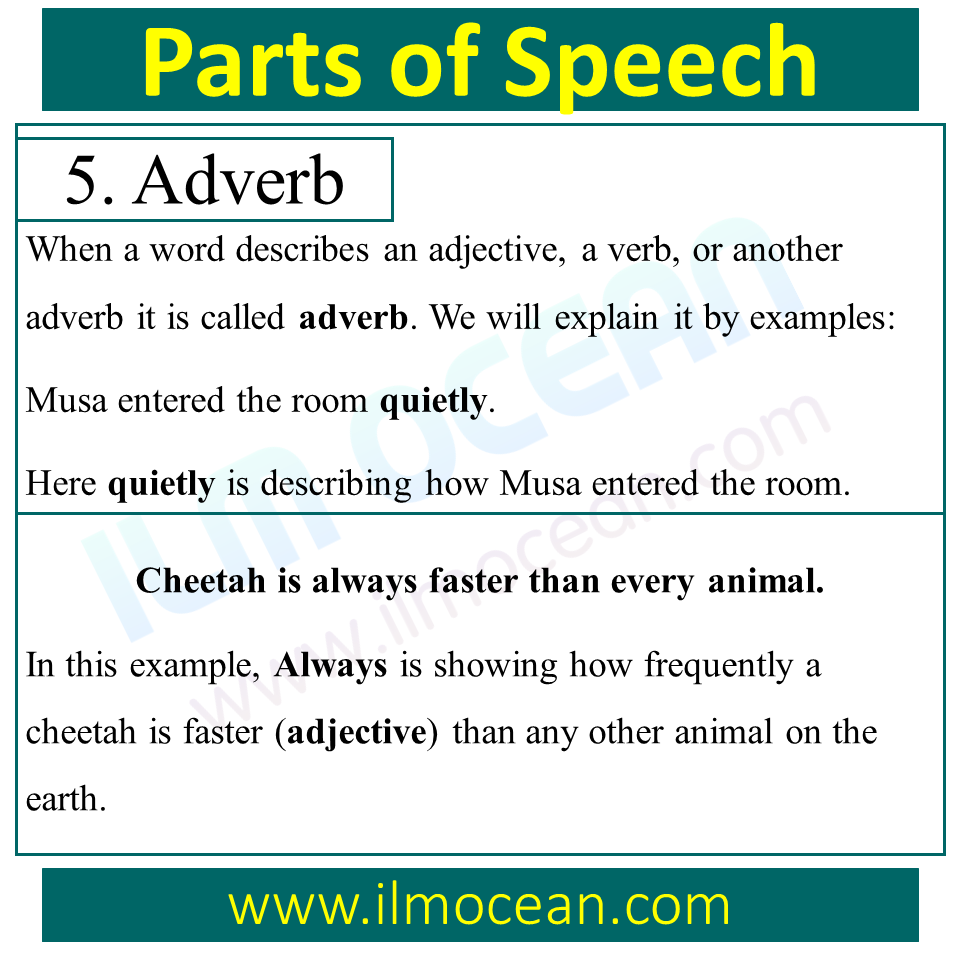 When we want to show any relationship between the other words in a sentence prepositions are used.

Clark left his car leaning against the garage.

We will explain it by another example:

Siara put the bread in the oven.

If we don’t use the preposition in, we don’t even know where the bread is. 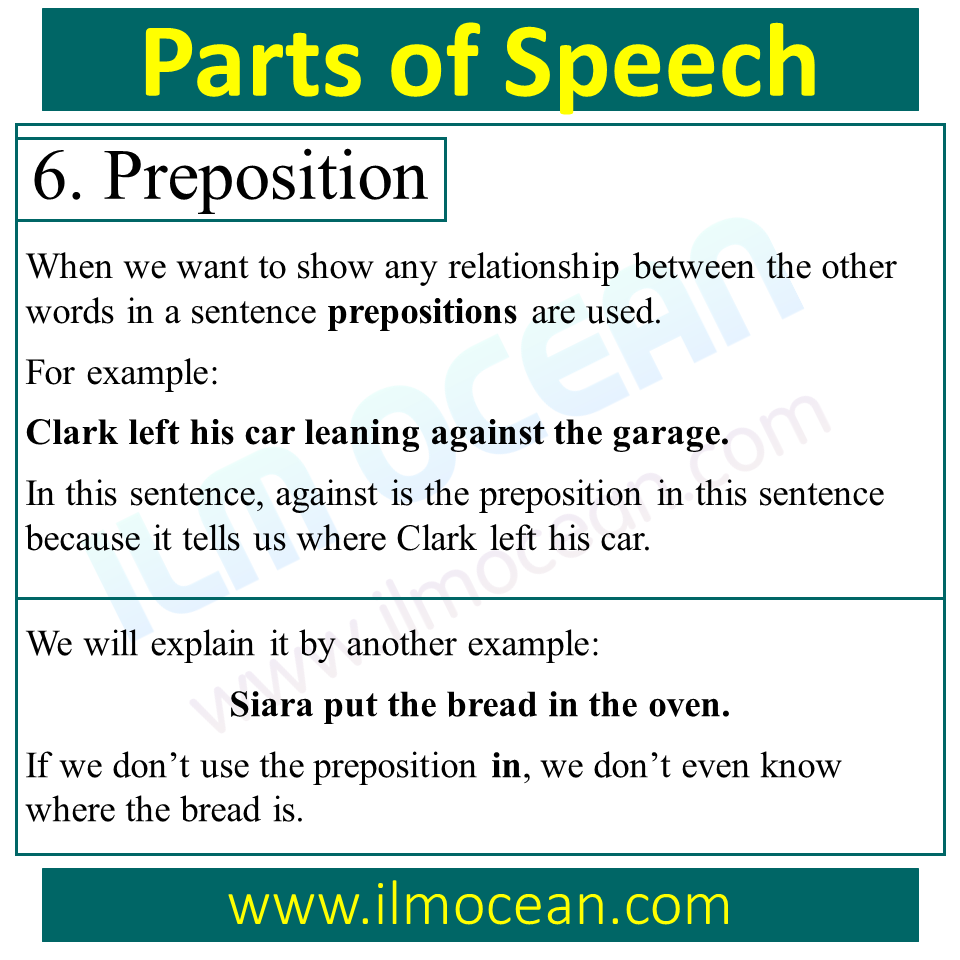 When we want to express multiple ideas to build a complex sentences, we use conjunctions. For example:

Every sentence gives clear idea and grammatically it’s not wrong but these sentences can be expressed in most efficient way. Look at the example below:

Stark likes pizza and burger but he don’t like potato chips.

In above sentence, and, but are the conjunctions that link Stark’s ideas together. 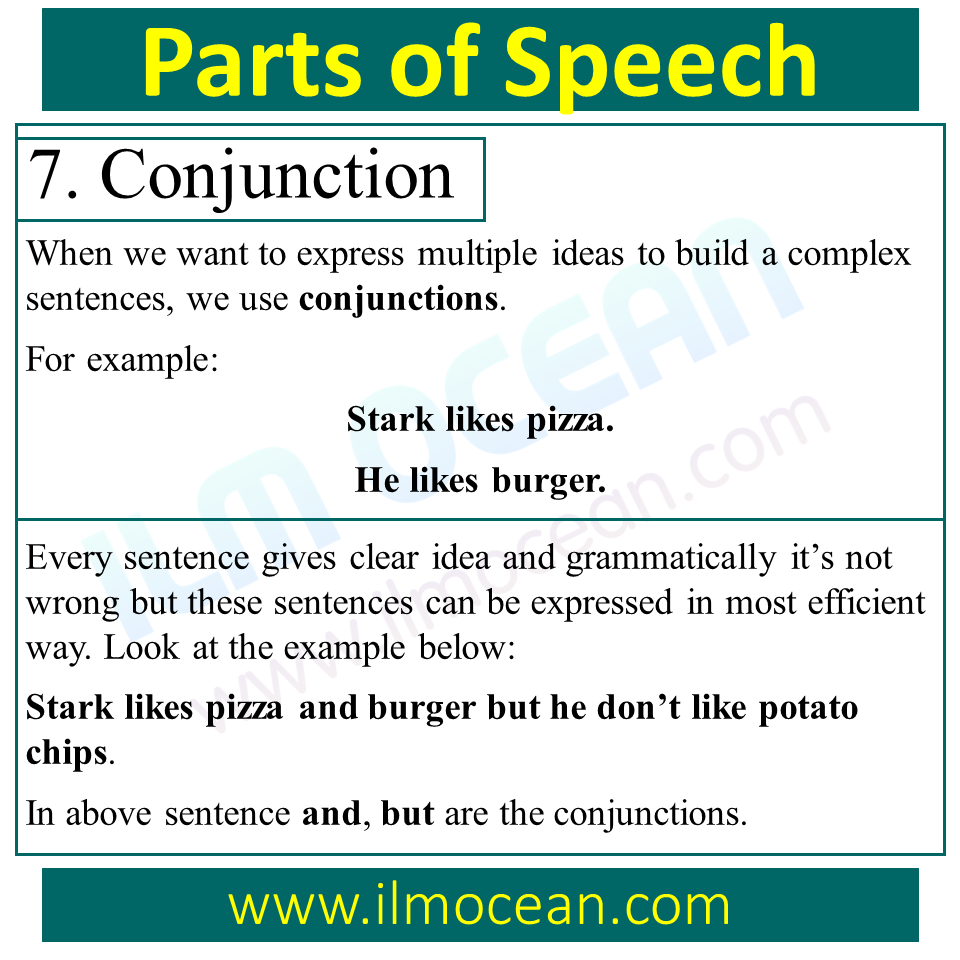 They are used to show emotion, reaction or excitement.

Hurray! we won the match

Oops! I dialed the wrong number

Alas! I am lost in wilderness

Wow! You did an amazing job

Oh no! Plane is about to crash

To express your any kind of feeling, you need some words and those words are called Interjections. 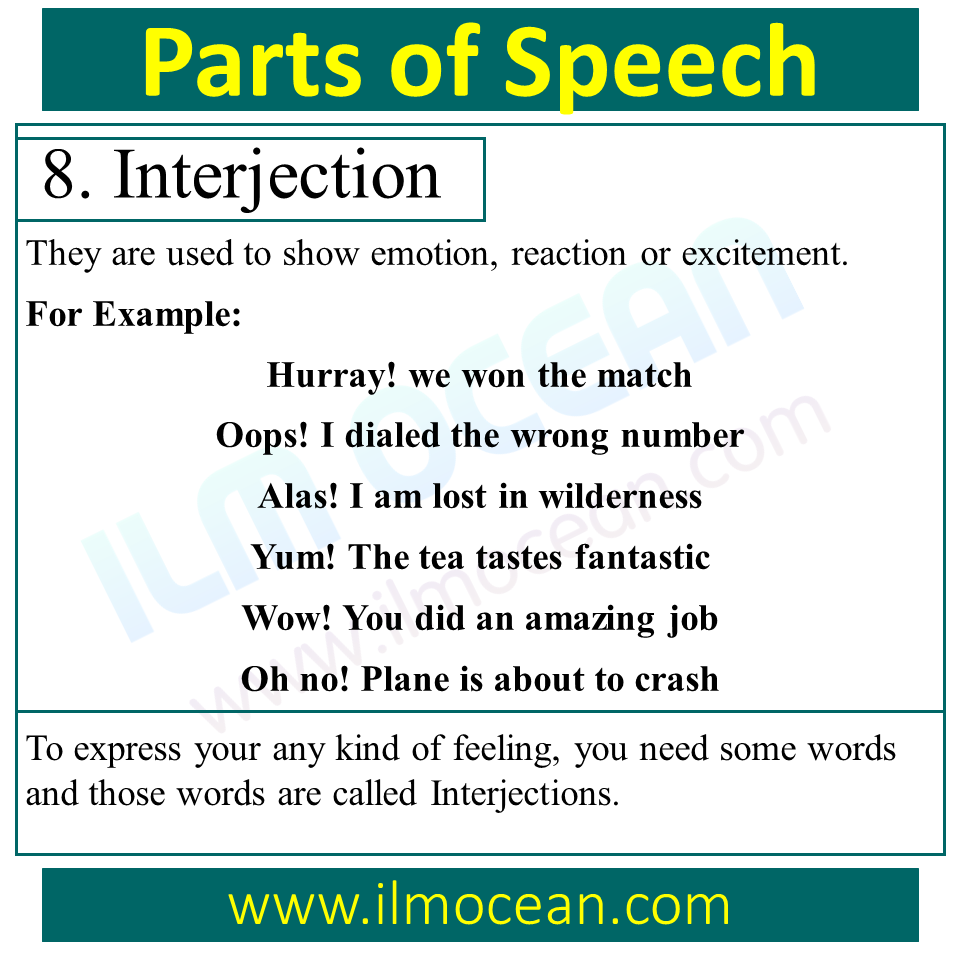 Some words introduced as new parts of speech in grammar. For example the word “adult.”  Adult was basically a noun that means a fully grown person. We also take it as an adjective when we refer it to specific types of media, like adult contemporary band. But after 2010s, a new word “adulating” was introduced as a verb. As a verb, adulting means “doing tasks like paying bills and grocery shopping”.

There are two main classes of parts of speech: open and closed.

Open word classes refer those parts of speech which regularly take new words. The evolution happens usually in parts of speech such as: nouns, adjectives, adverbs, and verbs. In the year 2020, three new words added to the Merriam-Webster dictionary included: truthiness, contactless and deepfake,

On the other hand closed word classes are the parts of speech that don’t add new words regularly. These parts of speech are taken as “set in stone” and it include pronouns, conjunctions, articles, and prepositions.