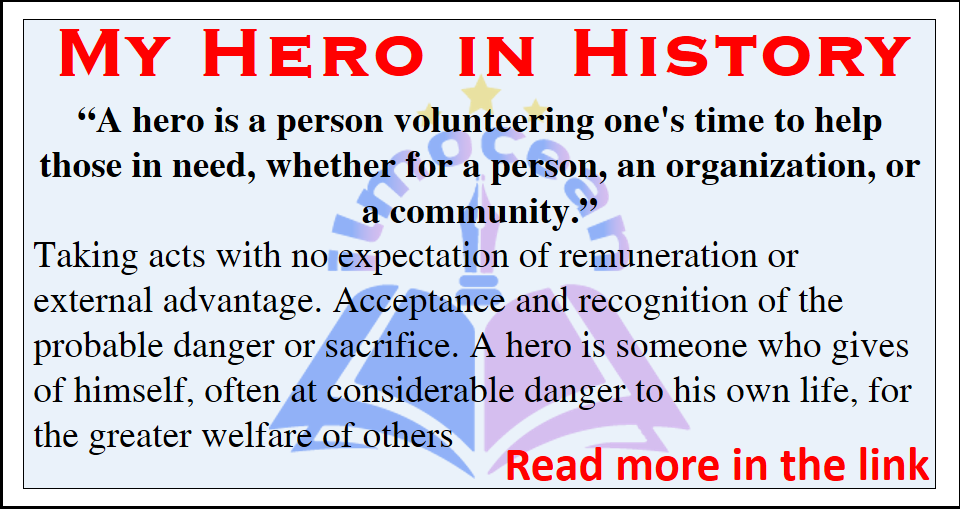 My hero in history essay for students of 2nd year with PDF book. This is outstanding essay for outstanding students. 1000 Words My Hero in History Essay. My Hero in History Essay is very much important from Examination Point of View. Download this Essay in PDF form at the bottom of Page. You can also write this essay when you are asked to write about your favorite personality, favorite hero etc.

My Hero in History Essay

A hero is a person volunteering one’s time to help those in need, whether for a person, an organization, or a community. Taking acts with no expectation of remuneration or external advantage. Acceptance and recognition of the probable danger or sacrifice. A hero is someone who gives of himself, often at considerable danger to his own life, for the greater welfare of others.

There have been several historical personalities who stood head and shoulders above their contemporaries. They have changed the direction of a nation, rewritten history, and many have even influenced our current way of life in innovative ways. There have been many outstanding Muslim leaders throughout history, but Imam Ali stands out as the shining star in his constellation.

Ali Ibn Abi Talib (RA) was the Islamic prophet Muhammad’s cousin, son-in-law, and friend who ruled as the fourth caliph from 656 until his assassination in 661. He is a pivotal person in Shia Islam, and Shia Muslims see him as the legitimate direct successor to Muhammad as an Imam. Ali was born to Abu Talib and Fatimah bint Asad within the Kaaba in Mecca, Islam’s holiest site. Under Muhammad’s supervision, he was the first male to join Islam. Ali defended Muhammad from a young age and participated in practically every conflict fought by the embryonic Muslim community.

He was quite generous. Despite eventually becoming the leader of Muslims, Muhammad never desired to accumulate goods and lived a humble life. He was always modest and grateful to the Almighty for all the benefits He bestowed upon him. He consistently assisted the underprivileged by donating his fortune to charity. Not only was he a Sahabi, but he also looked to be a brilliant visionary scholar. ‘He lived his life according to Islamic principles and helped humankind.’ He will never give up his support for Islam’s fundamental institutions. Being fair is another feature of his that makes him a role model for all of us, such as how he treated Muslims and non-Muslims equally. He promoted peace, love, and the advancement of humankind. His service to Islam was exceptional, and he was Islam’s greatest gift.

Hazrat Ali (RA) was a brilliant caliph and a wonderful friend of the Holy Prophet Muhammad (SAW). He has several accomplishments and heroic actions to his credit. Some are explained in the following paragraphs: –

The fourth caliph expanded his army and built various cantonments for it. He also boosted the number of police officers and implemented several changes in the police force. These cops were known as Ashurta, and their commander was known as Sahib-e-Ashurta. The Ashurtas were tasked with preserving law and order, investigating and controlling crimes, and ensuring the security of trade hubs.

Hazrat Ali (RA) enjoys the distinction of taking part in all Ghazwat ceremonies (battles). Ghazwat denotes “the war in which the Holy Prophet (SAW) personally participated.” Some of his daring deeds are described in the following paragraphs: –

During every adversity, Hazrat Ali (RA) stood shoulder to shoulder with Holy Prophet Muhammad (SAW). He took part in several Ghazwat (battles) and shown his bravery and commitment to the Holy Prophet (SAW). The Holy Prophet (SAW) chose three brave companions from the Bani Hashim clan for the Fight of Badar (the first battle of Islam). Hazrat Ali (RA) was chosen for the battle of Badar with Hazrat Hamza (RA) and Hazrat Obaida (RA). In this battle, he slew Islam’s most infamous foe, Waleed, in an instant.

The capital of Islamic nations was relocated from Madina to Kofa by Hazrat Ali (RA). This decision was made to facilitate the execution of administrative directives. However, some disloyal persons caused issues for his government there. As a result, the difference amongst Muslims began from there. Muslims were separated into several factions. These issues were properly solved by Hazrat Ali (RA).

All of Hazrat Ali’s traits motivate me, including honesty, patience, assisting everyone, being giving and kind to others, and being grateful to Allah for everything He has blessed us with. I will undoubtedly incorporate all of these characteristics into my everyday life in order to live a virtuous life like the Holy Prophet (Peace Be Upon Him) and Hazrat Ali (A.S).