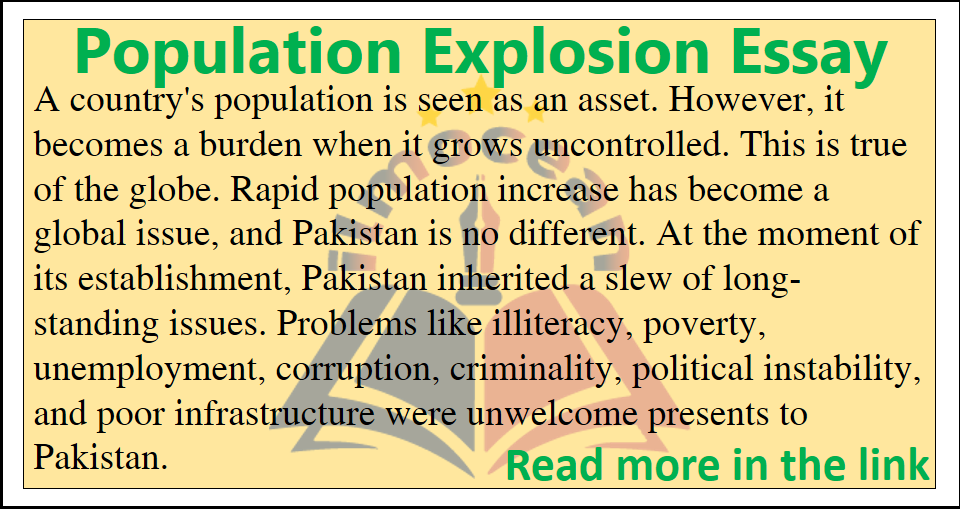 A country’s population is seen as an asset. However, it becomes a burden when it grows uncontrolled. This is true of the globe. Rapid population increase has become a global issue, and Pakistan is no different. At the moment of its establishment, Pakistan inherited a slew of long-standing issues. Problems like illiteracy, poverty, unemployment, corruption, criminality, political instability, and poor infrastructure were unwelcome presents to Pakistan. Overpopulation has fueled the flames even further. There are several causes for this, the most of which seems to stem from our social and cultural conventions. They are all having a negative impact on our society. Some of the significant consequences are a lack of food and housing, city overpopulation, poor investment, and so on. Let us first analyze the global problem of overcrowding and then look at the reasons and consequences for Pakistan.

Overpopulation has gripped the entire globe. It has surpassed the six-billion-dollar milestone. After terrorism, the population increase is the world’s most pressing issue now. Every day, we hear the phrase “Population Bomb” over and over again.

Pakistan had a population of 33 million people at the time of partition. Our country has now surpassed the 170 million mark. Pakistan’s population is now expanding at a pace of 1.57 per cent each year. If Pakistan’s present growth rate is maintained, the country would soon be number one in terms of population.

Following are the major causes of overpopulation that have adverse effects:

Overpopulation is primarily caused by illiteracy. Those who lack knowledge are oblivious to the need to limit population expansion. They are unable to comprehend the negative consequences of overpopulation. Lack of family planning is frequent among the world’s illiterate population. There is a tendency of big families in Pakistan’s rural areas, and owing to a lack of awareness and adequate education, individuals continue to produce more and more children.

On the one hand, science saves people’s lives, but on the other hand, it has a detrimental impact on population increase. In Pakistan, the death rate is low while the birth rate is high which causes overpopulation.

The rapid expansion in population can be attributed to our society’s practice of early marriages. Moreover half of Pakistan’s population lives in rural regions. People in rural regions have a conservative mindset owing to ignorance. For their children, they want marriages at a young age. They do so to keep them from engaging in unethical behavior. Kid marriage has an impact not only on the couple’s health but also on the child to whom they give birth.

The polygamy tendency is also to blame for this issue. In our rural communities, polygamy is the most frequent. People in rural regions want to have more than one wife at a time. This propensity of people aggravates the country’s population predicament. Similarly, inappropriate contraceptive technique use has had a harmful impact.

The preference for male children over female infants has exacerbated the problem in undeveloped countries. Again, religious enthusiasm instilled in the hearts of the uneducated class by pseudo-orthodoxy has very negative impacts on the ever-increasing population.

Only a small percentage of Pakistanis engage in outdoor activities like dining out, local and international travel for pleasure and employment, and so on. The majority of people are unable to participate in any of these activities. This is mostly due to a lack of funds and opportunities. Therefore, the absence of leisure activities drives people to stay with their life partner. The man conducts his function like a drone.

The inability of the government’s Population Planning Policies to be properly implemented is the primary cause of population rise. Many policies have been developed up to this point. However, none of them has yielded the expected outcomes. In Pakistan, population planning implementation faces several problems. In Pakistan, cultural and religious organizations regard family planning as a heinous crime. This is the fundamental reason why many parts of Pakistan still lack family planning centers. Misconceptions, rumors, and misleading propaganda concerning family planning techniques are other significant causes.

The consequences of overpopulation

The environment suffers disproportionately as a result of population increase. Population expansion and expansion, resource usage and depletion, and environmental deterioration must all be addressed together and on a global scale. Some of these impacts are defined below:

The country’s economic progress has been impeded by overpopulation. The high population is to blame for the reduction in per capita income. People’s purchasing power suffers as a result of this. As the demand for goods falls due to the “Demand and Supply” rule, investment in the country suffers. A stagnating economy will result in the closure of companies and enterprises, resulting in joblessness and poverty.

Even if the government is successful in luring foreign investment, overpopulation will have a negative impact on the country’s economy. A growing population implies a greater number of hungry individuals to feed. This is the “Dependency ratio” problem, which is severely felt in our country.

Even after serious attempts by successive governments, the country’s social services have struggled for years. More schools, hospitals, and parks will be of little consolation if the population continues to grow at an alarming rate.

Overpopulation has exacerbated a variety of societal ills such as anarchy, crime, and corruption. The struggle for resources has divided society into two camps: those who have everything and others who are fighting for their own life.

City overcrowding has also led to harmful pollution. A higher number of automobiles on the road means that significant amounts of a hazardous gas are available for humans to inhale. Population growth can also be blamed for sewage issues and a shortage of safe drinking water.

Pakistan is currently at a crossroads. What is required at this time is vision and true leadership capable of turning aspirations into reality. The population problem has begun to stalk us, and unless we address it pragmatically, our hope of a bright and magnificent future will remain a devout fantasy. Overpopulation necessitates a multi-pronged assault. Our first objective should be to build a strong Pakistan. If we have to make some difficult decisions to achieve our goals, no one should be afraid to take the initiative and pull the trigger. Indeed, Pakistan takes precedence above our interests.