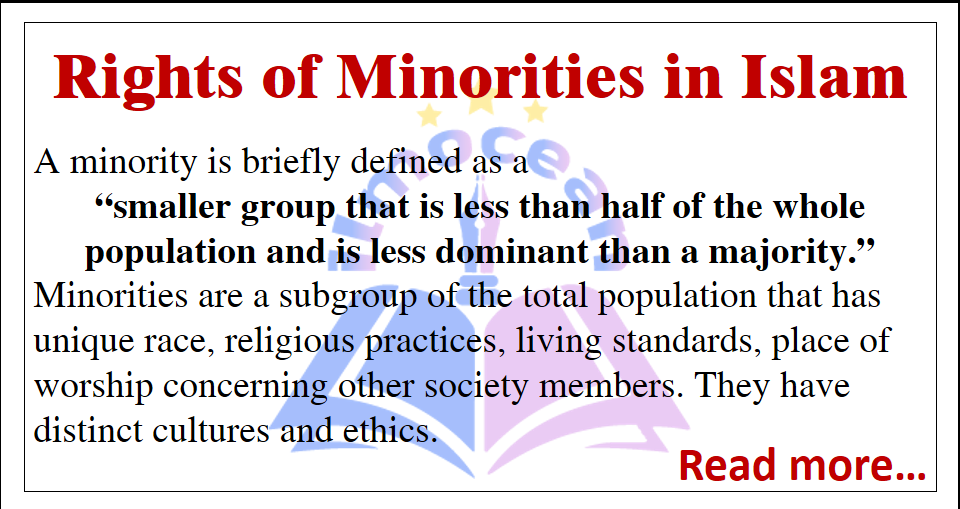 A minority is briefly defined as

“a smaller group that is less than half of the whole population and is less dominant than a majority.“

Minorities are a subgroup of the total population that has unique race, religious practices, living standards, place of worship concerning other society members. They have distinct cultures and ethics.

Islam refers to the meaning of “the path of peace” and its believers are called “Muslims”. The beginning of Islam was truly based on humanity and equity. Prophet Muhammad, the most beloved prophet of Allah preached Islam by His deeds and teachings. In the light of Islam, the dignity and respect of all humans are first and foremost. Islam believes in the equal rights of all human beings regardless of their race, religion, culture, and living standards. In Quran Majeed, the holy book of Islam, Allah said:

“There is no Jabbar (oppression) in religion”

The verse refers that you can’t force someone to accept Islam. You can live your life according to your own religious beliefs and traditions and not even a single Muslim is allowed to oppress anyone in this regard.

During the time of the Holy Prophet Non-Muslims such as Jews were judged by their own laws. He said that Muslims must be sensitive to the needs of Non-Muslims. Meesaq-e-Madinah is one of the most well-known examples of equality among Muslims and Non-Muslims from the life of Hazrat Muhammad PBUH. The constitution formed the basis of a multi-religious Islamic state in Madinah.

In Islamic history, a well-known pact called “Dhimmah” refers to the pact of Hazrat Umar, the caliph of Islam, with the Non-Muslims in which he declared the protection of property, protection of life, and freedom of religion and their religious practices. Moreover, he also made it compulsory for Muslims and Non-Muslims to pay the tax to the central treasury in return to the services of the military called “jizya”.

The most fundamental rights that Islam declared for minorities in any Islamic state are:

Right to the Protection of Life:

All the citizens of any state must protect the life of each other whether they are Muslims or Non-Muslims. The killing of an innocent person is considered as Haram whether the martyr belongs to any religion. The Quran called it a heinous crime and the punishment of “Qisas” (life for a life) has been declared to meet the standard of justice.

In fact if a Non-Muslim is murdered purely because he is a Non-Muslim, then it is declared as a crime of “Hirabah”. It is considered a state crime.

“Whoever kills a human being without (any reason like) manslaughter

Or corruption on earth, it is as though he killed all mankind”.

Right to the Freedom of Religion:

Non-Muslims in an Islamic state have a right to own their lands and houses according to the laws of the state. The land of a Non-Muslim is as secured as the land of a Muslim.

Right of Inviolability of Honor:

Islam believes in universal human honor. There is no compulsion of religion to respect each other. You cannot force Islamic laws and should respect the culture and religion of minorities. Islam respects the right to autonomy.

Non-Muslim Visitors to a Muslim State:

The Non-Muslims visits an Islamic state, who are the citizens of another state such people are called called “Muahid”. For them, Prophet Muhammad (SAW) said that:

“Those who killed a Muahid cannot smell fragrant of Jannah

Even though it can be perceived from a distance of 40 years of traveling.”

The Right to Freedom of Expression:

The Quran forbids Muslims to suppress Non-believers. Islam lets everybody bring out his perception and thoughts, discuss their matters openly, accept or reject ideas. The Sunnah also maintains the right to freedom of expression unless or until the speech is hateful or hurtful.

The Right of Family:

According to the Islamic concept, a family is a group of children that emerges from the union of man and woman through a marriage contract. Islam gives equal rights to Muslims and Non-Muslims to raise their family and bring them up. They can get education and health services like Muslims.

The Right to Justice:

The Right to Basic Necessities of Life:

In an Islamic state, minorities enjoy the right to necessities like education, health, food, residence, transport, proper burial system. Minorities can avail all the facilities a state provided to the Muslims. They can run their businesses and do jobs.

Participation in Affairs of State:

According to Islam, minorities can take part in the affairs of an Islamic state in which they are living. They can cast vote to elect the government. They can represent their nation in every field. They can express their views in matters of state.

The rights fourteen hundred years ago Islam gave to minorities are no doubt enough to strengthen the faith of Muslims and Non-Muslims. We could realize that even in the modern age when progress and enlightenment have no bound the world is unable to give more just and equitable rights than those given fourteen hundred years ago. Islam proves that there should be equality among Muslims and minorities to build a peaceful nation. Humanity is above all and everyone should be respected for being a human being. Minorities should be treated with justice and provided with basic needs and protection.