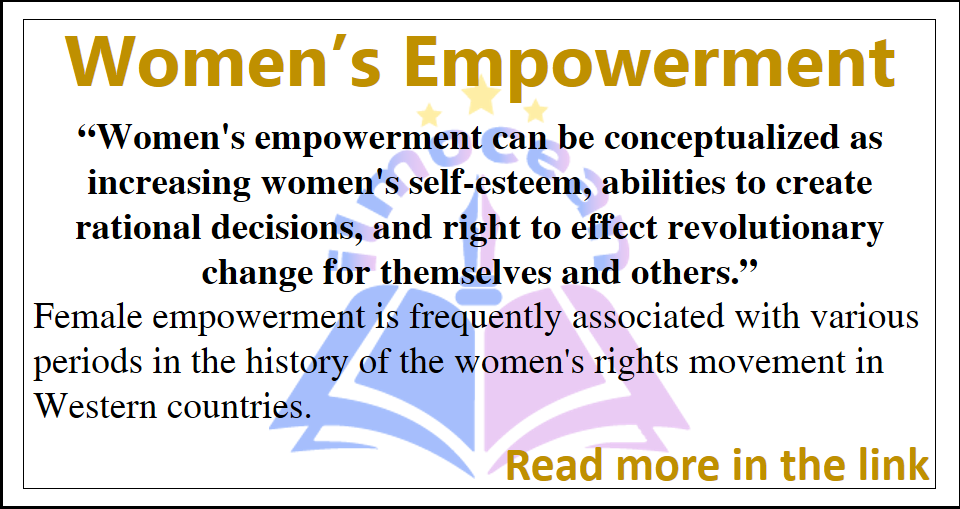 “Women empowerment can be conceptualized as increasing women’s self-esteem, abilities to create rational decisions, and right to effect revolutionary change for themselves and others.”

Female empowerment is frequently associated with various periods in the history of the women’s rights movement in Western countries.

Empowering women means to give women the ability to make their own decisions. Women are suffering greatly at the hands of men over the decades. They were regarded as if they’ve never came into existence in previous eras. As if all rights, including the right to vote, belonged solely to men. As time progressed, females became more conscious of their strength. The revolution for women’s empowerment began there. Women’s suffrage had been a breath of fresh air even though they had previously been denied the right to take decisions. It made them responsible of their rights and the importance of forging their own path in society rather than relying on a man.

Why We Need Women Empowerment?

Almost all countries, regardless of how progressive, have a history of mistreating women. To put it another way, women from all over the world have been defiant to achieve their current standing. While Western countries continue to make progress, third-world countries such as India continue to lag in terms of women’s empowerment.

Women’s empowerment is more important than in Pakistan. Pakistan is one of the countries where women are not safe. This is due to a variety of factors. For starters, women in Pakistan face honor killings. Furthermore, the education and freedom scenario is very regressive in this case. Females are not permitted to continue their education and are married off at an early age. Domestic violence is another major issue in Pakistan. The men beat up and abuse their wives because they believe women are their property. We must empower these women to speak up for themselves and to never be victims of injustice.

Empowerment includes everything from self-strength to efficiency building. Females, however, women’s empowerment can now be divided into five categories: social, educational, economic, political, and cultural/ psychological.

Quality education is the most vital thing women should be provided, so that they are aware of their rights and responsibilities, as well as frees legal aid to fight their cases without spending money. A well-educated mother is a thousand times better than a mere lecturer. Education gives a person self-confidence, self-esteem, and self-sufficiency. It brings hope; raises social, political, intellectual, cultural, and religious consciousness; lengthens the mind; removes all forms of bigotry, narrowness, superstition, and promotes compatriot, tolerance, and so on.

Women’s participation in politics and various decision-making bodies is an effective component of empowerment. Women’s participation at all stages of political structures is critical at this time for women’s actual empowerment. It would be extremely difficult for women to increase their effectiveness, capacity, and challenge the existing power structure and patriarchal ideology if they did not participate in politics.

Economic empowerment is a dire requirement of the hour. Women earn money through employment, allowing them to become “breadwinners,” contributing members of households with a strong sense of economic independence. Economic empowerment is a powerful tool in the fight against poverty. Women’s empowerment is not only a matter of equal consideration; it is also a necessary precondition for long-term economic and social development. Other rights and responsibilities are meaningless to the people unless they have economic self-sufficiency.

Women who are psychologically empowered not only break traditional and patriarchal taboos and social obligations, but they also transform their selves and subjectivities. When women join the education system, political groups, or judgment bodies; hold white-collar jobs, make decisions, and travel to different places; occupy land and wealth, they feel psychologically empowered and gain control of their own income and body. Joining any institution or occupation allows them to see and learn more about the world than those who remained at home.

How Can We Empower Women?

There are various possible approaches to empower women. Individuals and the government must work together to make it happen. Girls’ education should be made compulsory so that women can become illiterate and make a living for themselves. Regardless of gender, women must be given equal opportunities in all fields. Furthermore, they must be paid equally. By prohibiting child marriage, we can empower women. Various programs must be held to teach them how to fend for themselves in the event of a financial crisis.

Most notably, the grief of divorce and abusive behavior must be abandoned. Because they are afraid of society, many women remain in abusive relationships. Parents must instill in their daughters that it is acceptable to return home divorced instead of in a casket.

Women’s Empowerment from a Feminist Perspective:

Feminism is described as the organization’s objective of empowering women. Consciousness-raising and relationship-building with women participants and external tyrants are two methods feminists use to foster a sense of women’s empowerment.

When women raise their consciousness, they learn not only about their struggles but also how they relate to political and economic issues. Upping consciousness enables marginalized people to see where they fit into the larger social structure.

Moreover, feminists emphasize relationship building as a means of empowering women. Building relationships leads to empowerment so because the growing presence of power holes in society is due to a lack of relationships.

It is now widely acknowledged that the issue of women’s empowerment for positive change and transformation of the existing unequal society is becoming increasingly critical and important. Women’s roles as mothers, homemakers, wives, and sisters are well known, but their role in shifting a country’s entire power relations is a new concept. The struggle for women’s equality began to ferment, and the fight for female’s causal factors, including voting rights, took physical reality.