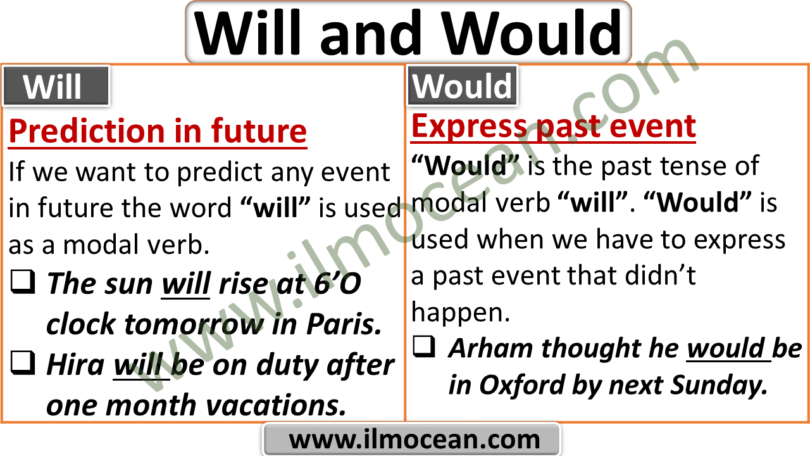 Use of will and would are very important in grammar. Use of will and would is very tricky and it is very difficult to defferntiate them. If we follow proper rules then we can understand the use of will and would. “Will” and “would” used as modal helping verbs in English grammar that we use often in sentences and are very important in English grammar. Both words are so similar that it is very difficult to use them properly. So both words require much attention when we use them in a sentence to avoid mistakes. If we use these modal helping verbs in a wrong way then it can cause much confusion to understand the meaning of any sentence. So it is very important to understand when to use the modal verb “will” and “would”. Here are some rules which will guide you to the correct usage of “will” and “would” in English grammar.

Use of the Word Will.

If we want to predict any event in future the word “will” is used as a modal verb. It tells about some action that may happen in future or describes someone’s intention to do something in the future. Mostly it is used in definite statements. Following examples show when to use “will”. 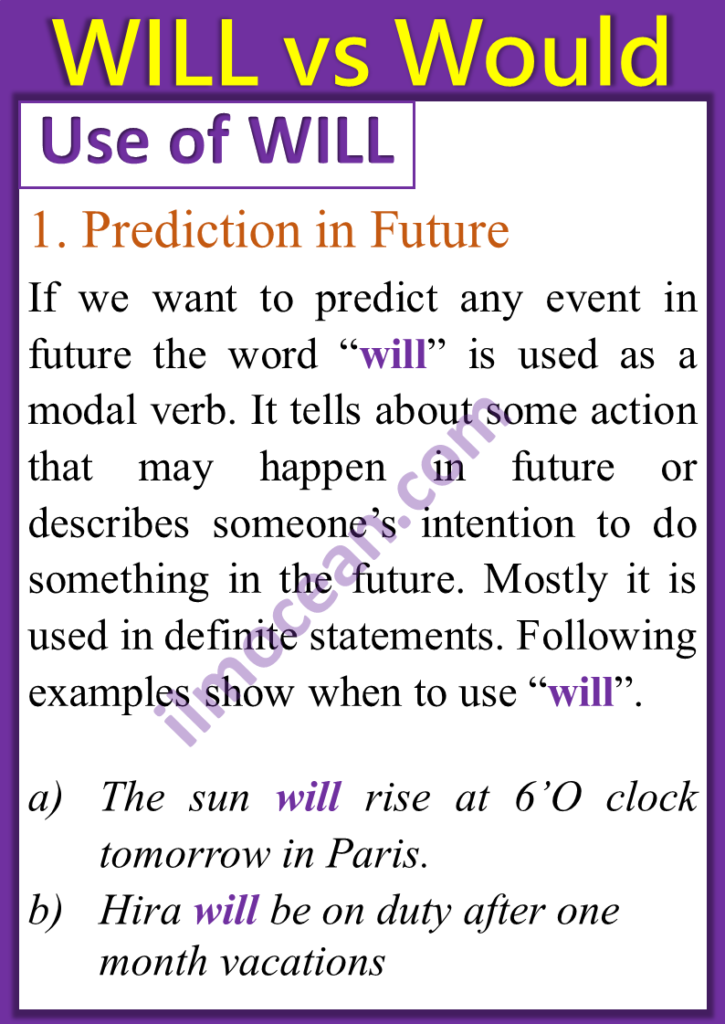 We use “will” if we want to make promises or we are offering something to someone. Look at the given examples that will clear use of “will” in making promises and offers.

“I will send you some mangoes of Multan.”

“Haris will buy you a gift for your wedding.” 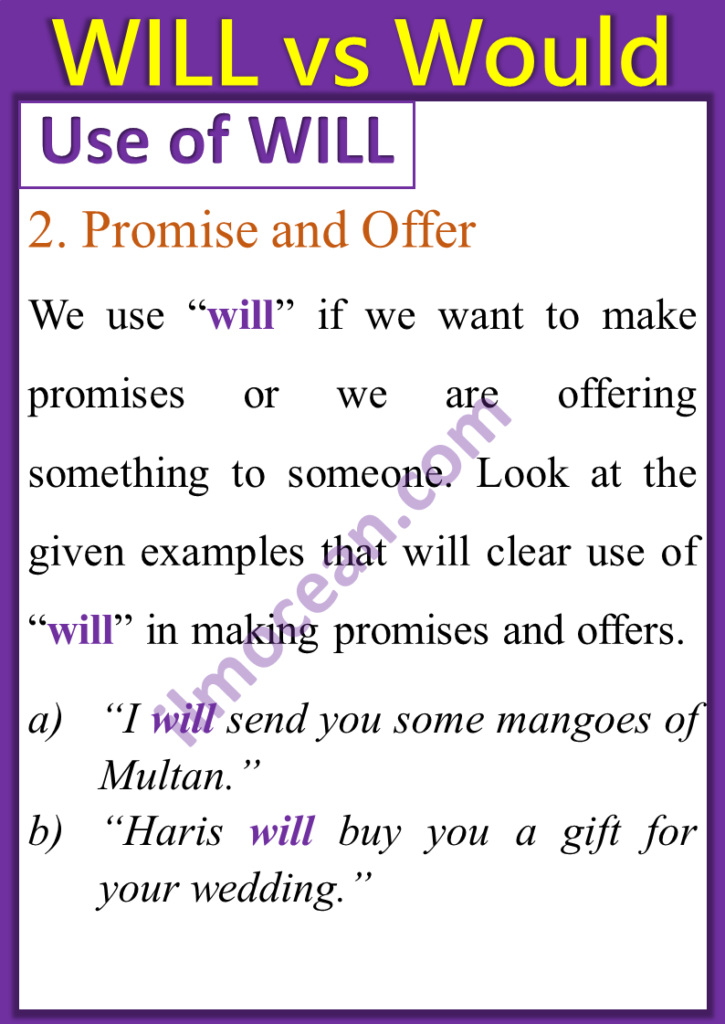 It is sometimes used as a first conditional statement. Look at the example below:

“If Hina work hard, she will pass the term with A grade.”

“If Saba do not follow instructions, she will face a trouble.” 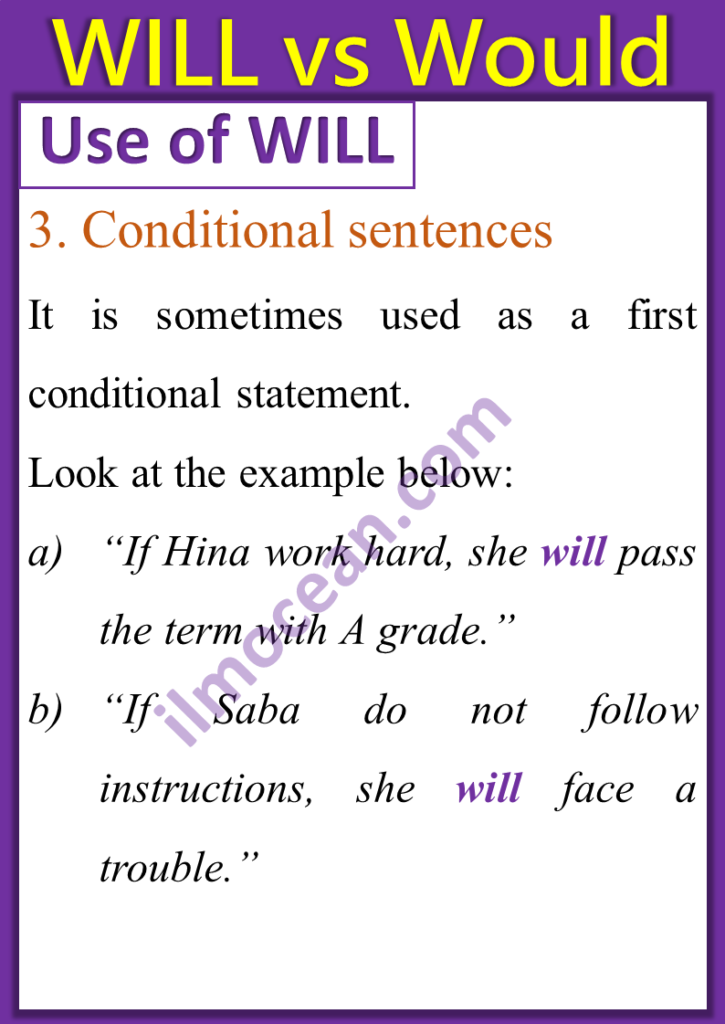 If we want to express some beliefs, we use modal verb “will”. Look at the below examples:

“I believe you will never tell Mitchel about my words.”

“Capitalists believe Pakistan will get prosperity under their control”.

When we want to express a decision, we use modal verb “will”. Look at the given examples:

“Sana is feeling hungry; so first she will have dinner.”

“To score more marks; Simon will work hard in next term.” 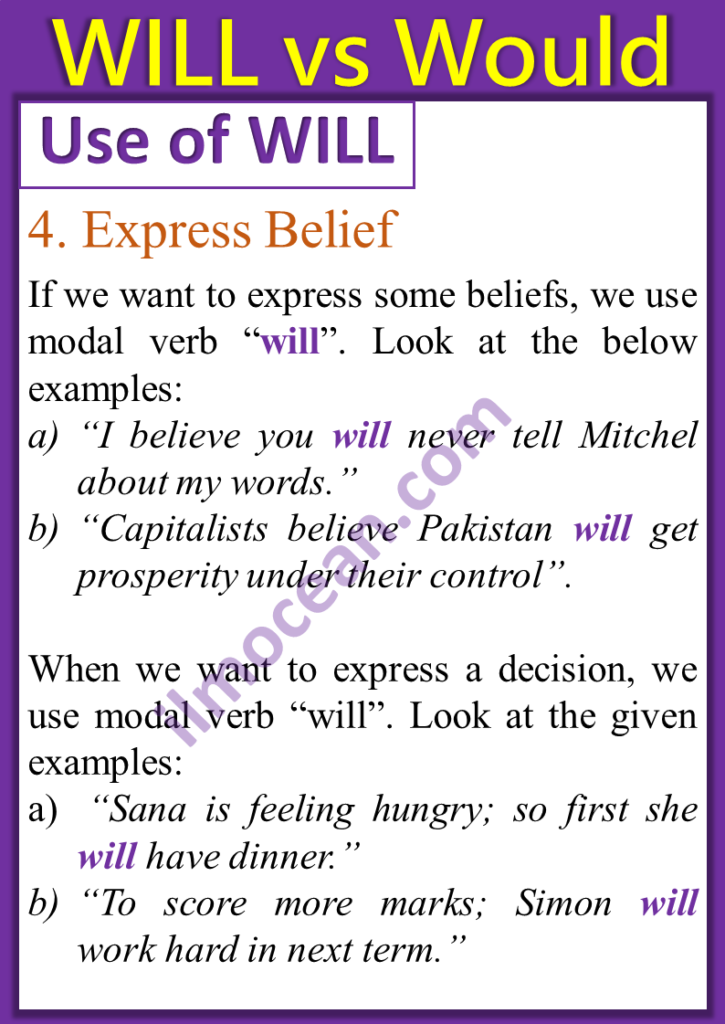 How to Use the Word Would?

“Would” is the past tense of modal verb “will”. The modal backup verb would is used when we have to express a past event that didn’t happen. Look at the given example:

“Arham thought he would be in Oxford by next Sunday.” 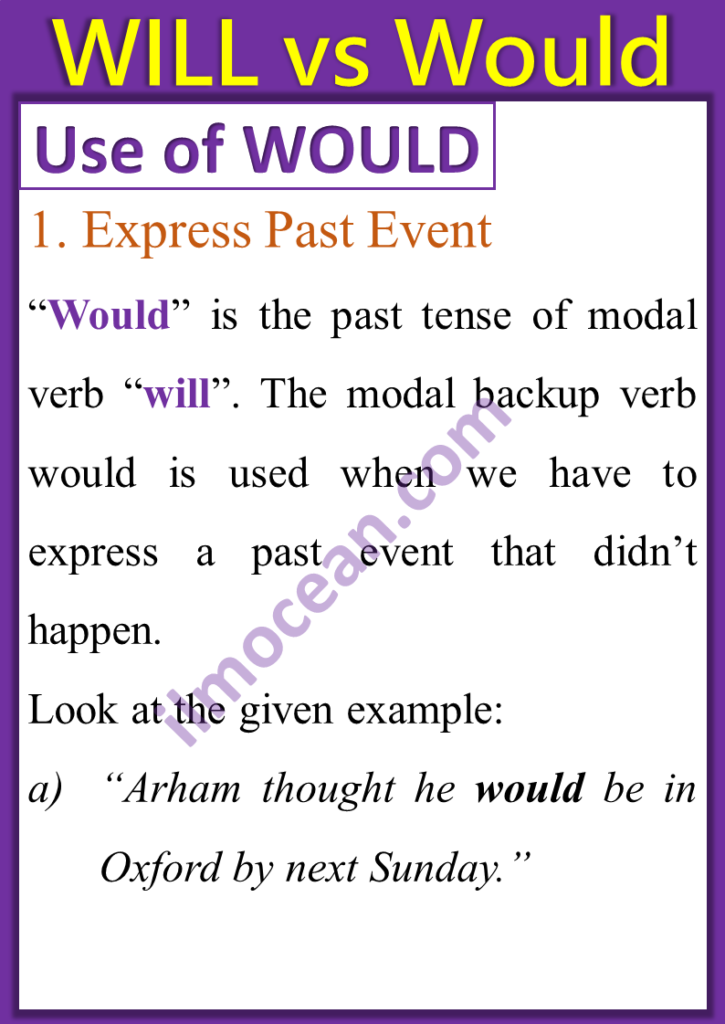 When we want to discuss an event that is unreal or an imagination, we use the word “would”. Look at the given example:

“If Wade had four eyes, he would see all around.”

“If oxygen is available there, the Mars would be a planet to live.” 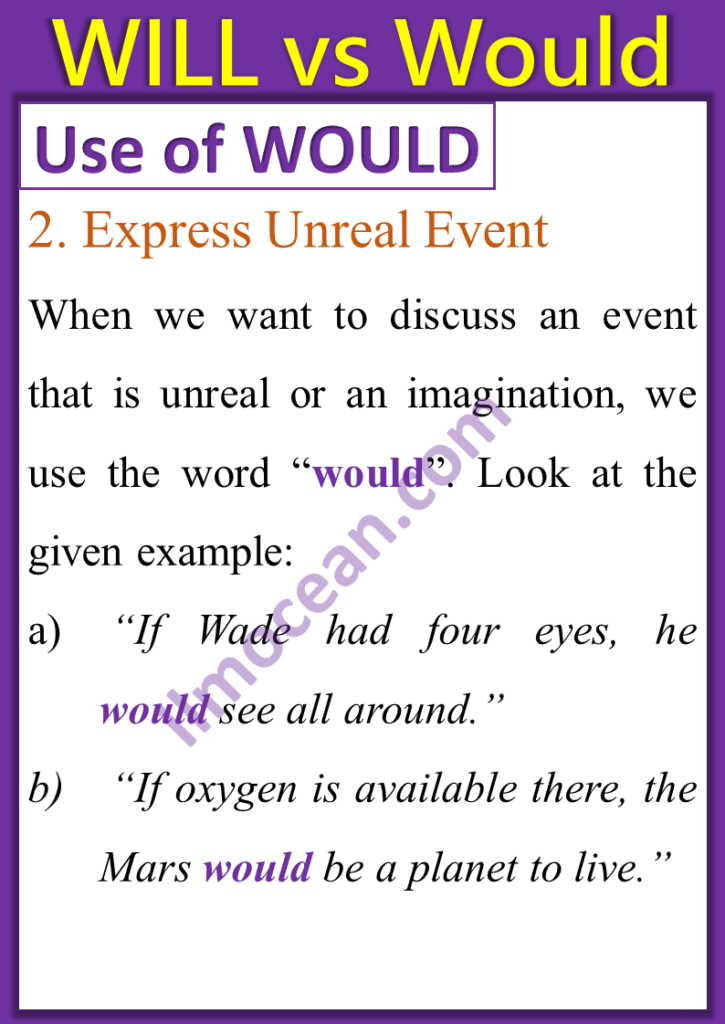 If anyone wants to report the past conversation, he should use the modal verb “would”. We also use it to express any event held in the past. Look at the given example:

“Raheel wasn’t feeling fresh, so he would have a cup of tea.”

It is used in past perfect tense. Look at the given example:

“If Saria run fast, he would have first position in school.”

“If Brittney went to a nearby music school, she would have become a professional musician.” 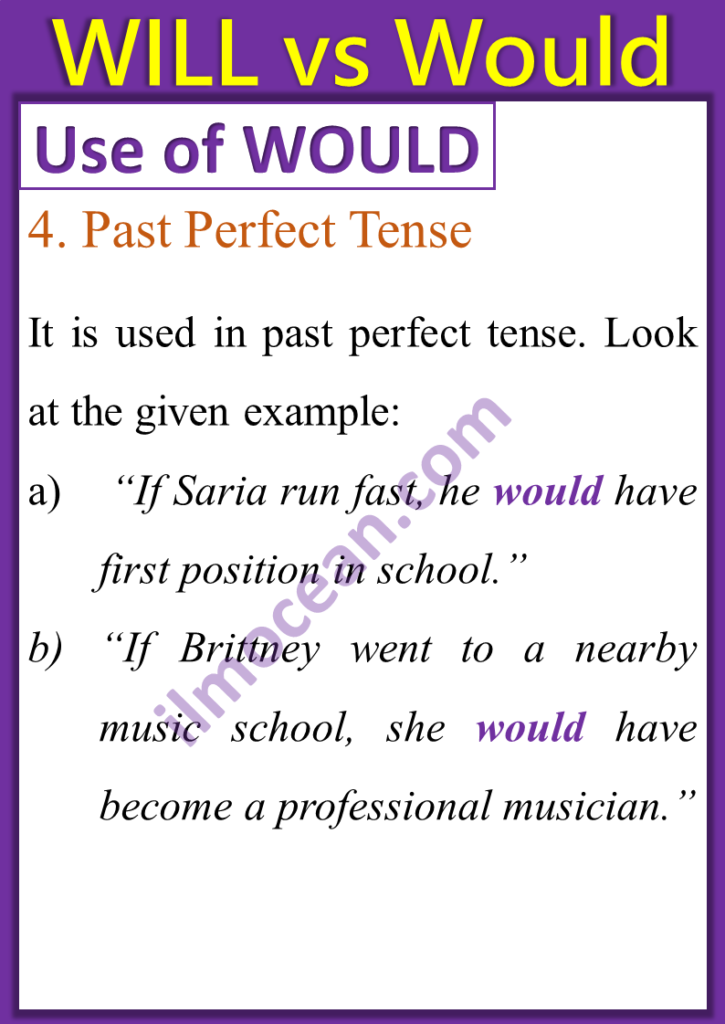 When we want to express polite expressions like requests or permissions, we use the modal verb “would”. Look at the given example:

“Would you mind lending me fifteen Euro?”

“Would you like to have some fresh apple juice?”

“Katherine would like to have a cup of milk.” 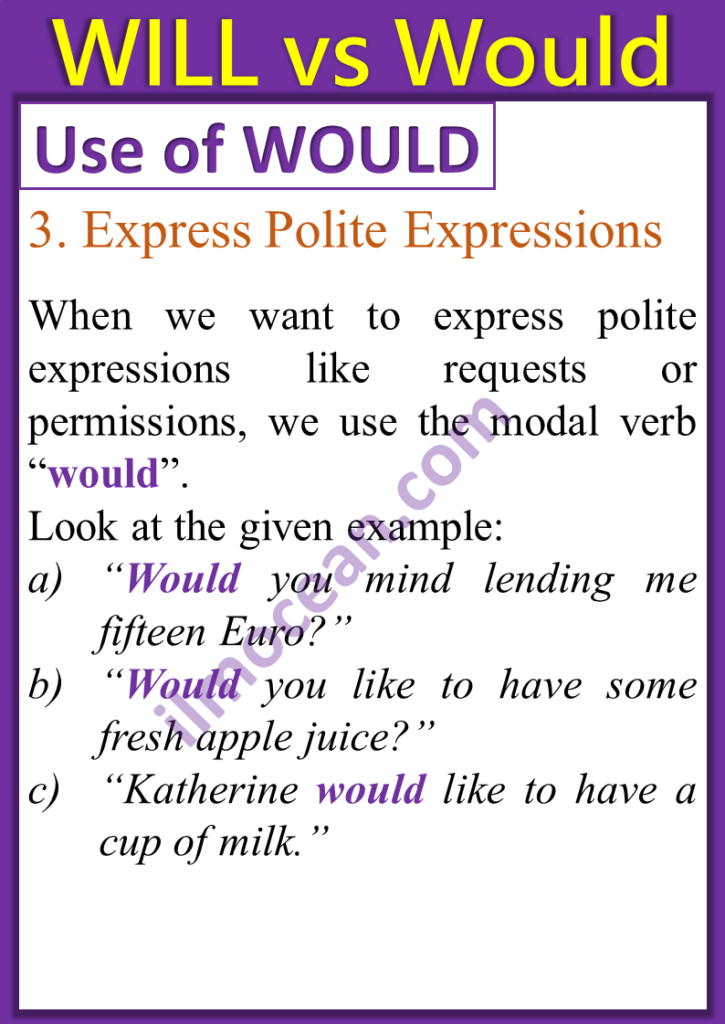 Significant differences between Will and Would