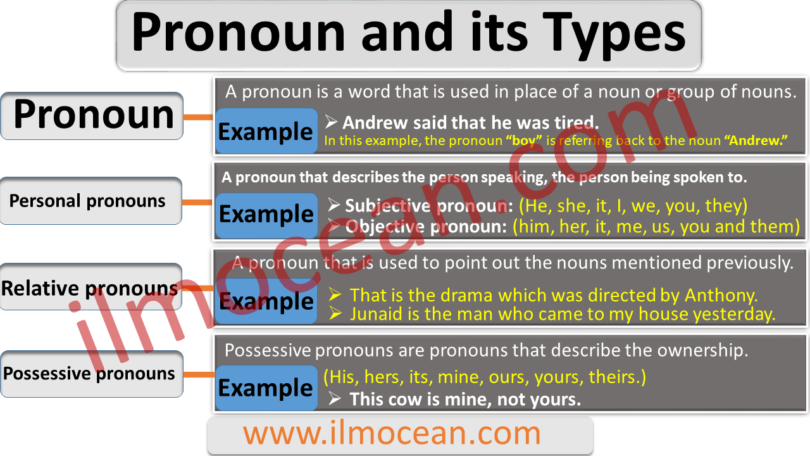 Pronoun is very important in English grammar. Simply pronoun is ued in place of noun. The primary and vital role of pronoun is to avoid repetition of noun in a sentence or paragraph. When a noun that is replaced by a pronoun, it is is called antecedent. There are many types of pronon. To get clear idea about them read the aticle in detail. Like a verb, pronouns are the major part of a sentence. It has an important role in a sentence. They are often present in every sentence, so it is very important to use them correctly in a sentence. Here, we will discus its ten kinds.

Definition and Kinds of Pronouns in English 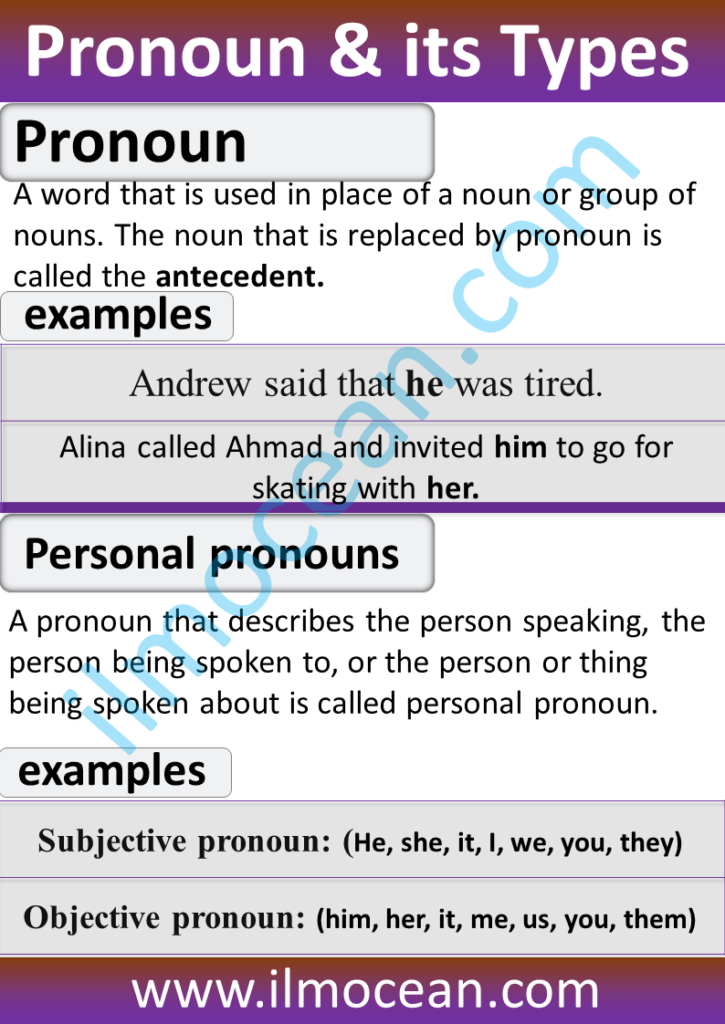 When a question is asked using a pronoun, it is called interrogative pronoun.
(Who, what, which, whom whose).
The question may be a direct question, in this case, a question mark will come at the end of a sentence. It can be an indirect question also.

When pronouns describe a person which is unspecified, it is called Indefinite pronouns. For example (person, place, thing, or idea.)
All, anyone, both, each, anything, everybody, many, no one, some and someone are some indefinite pronouns. 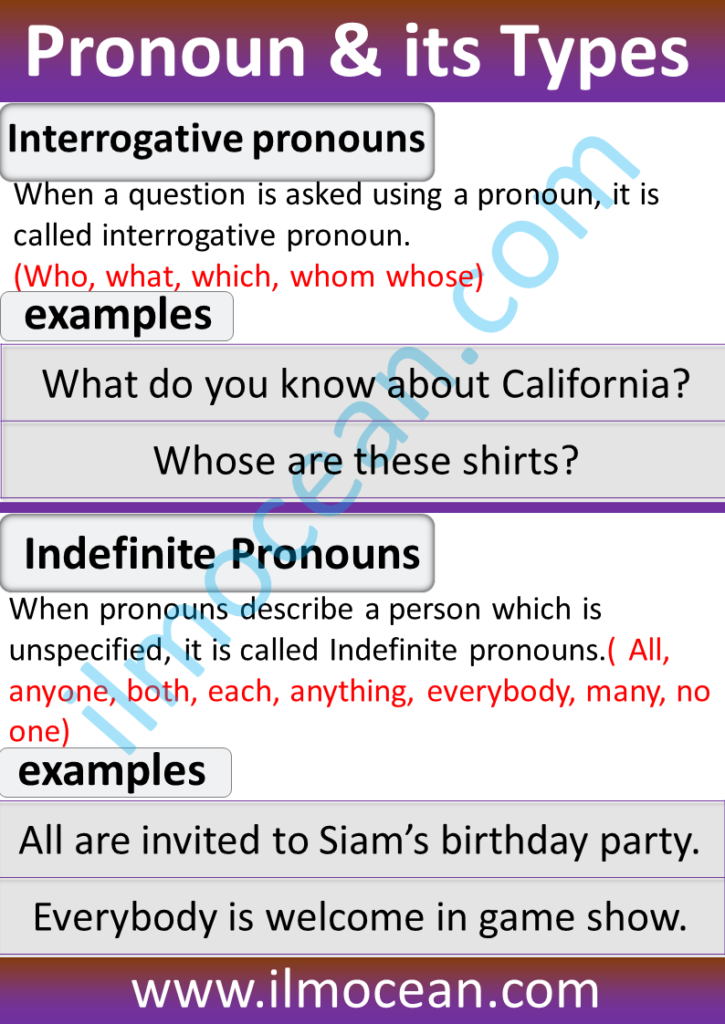 When a pronoun is used to point out the nouns mentioned previously, it is called relative pronoun. It is also used to introduce a subordinate clause. (Who, whom, whose, which and that)

Note: Keep in mind that relative pronouns and relative adjectives are different.

Possessive pronouns are used to describe the ownership.
(His, hers, its, mine, ours, yours, theirs.) The main purpose of this type is to bypass repeating information that has already been made clear. These useful pronouns help us to avoid confusion and make a sentence very clear. 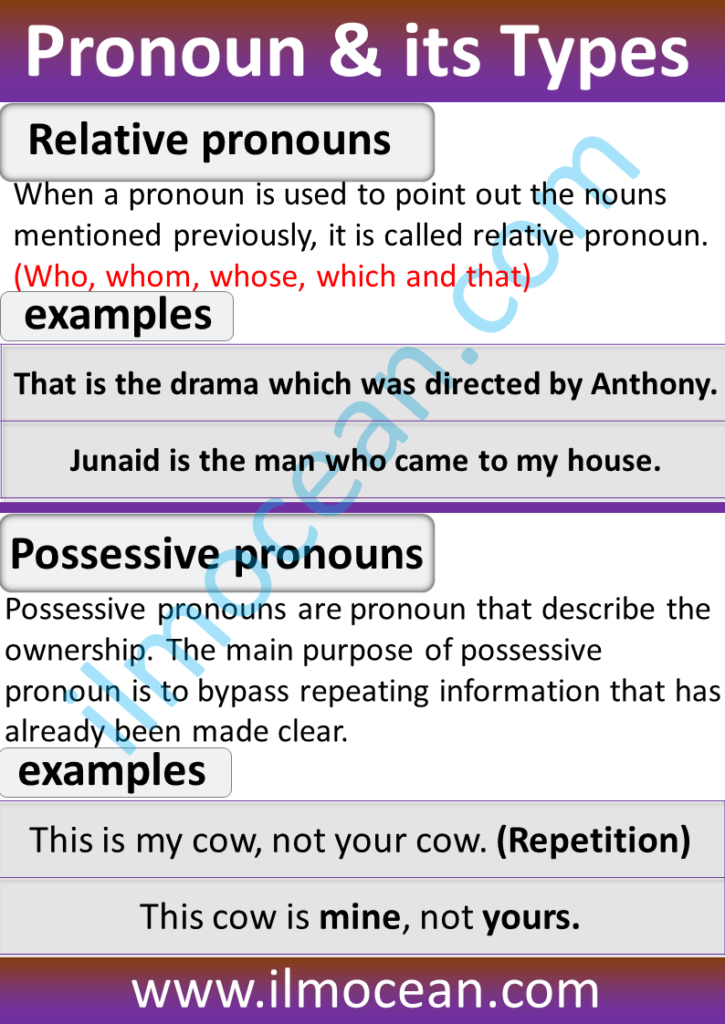 These pronouns are used only to place stress on the subject.
Note: These pronouns are similar to reflexive pronouns, but in a sentence, they act differently. They are always placed next to the subject that they are stressing. (Myself, himself, itself, yourself, herself, ourselves, themselves). 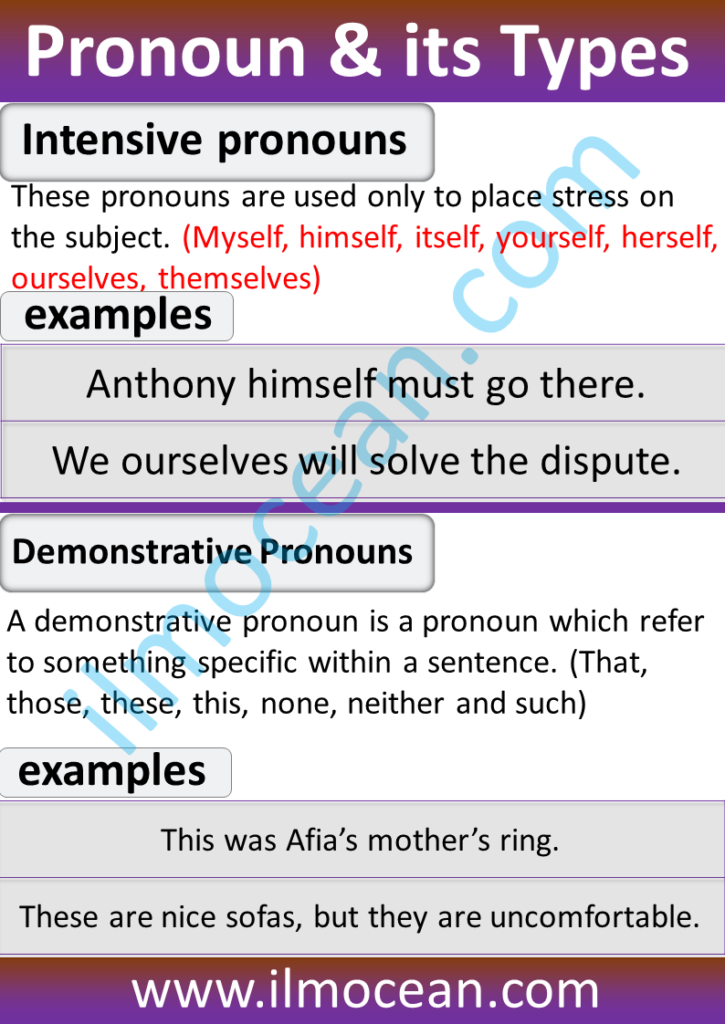 It is a pronoun which refer to something specific within a sentence.
These pronouns are used to indicate items in space or time, and these can be either singular or plural. (That, those, these, this, none, neither and such)

How to Use Demonstrative Pronouns?
Main function of tis type is to identify nouns, whether they are named specifically or generally.

We have no idea about the word “this”.

So it is clear that demonstrative pronouns are often used to describe animals, places, or things.

These types of  pronouns refer to a mutual set of people.
(Each other, one another, each other’s, one another’s).

Distributive pronouns are used when we have to refer more than one person or thing separately.
(Either, Each, and neither)

Note: It is very important that a distributive pronoun is always singular and it take a singular noun and verb. 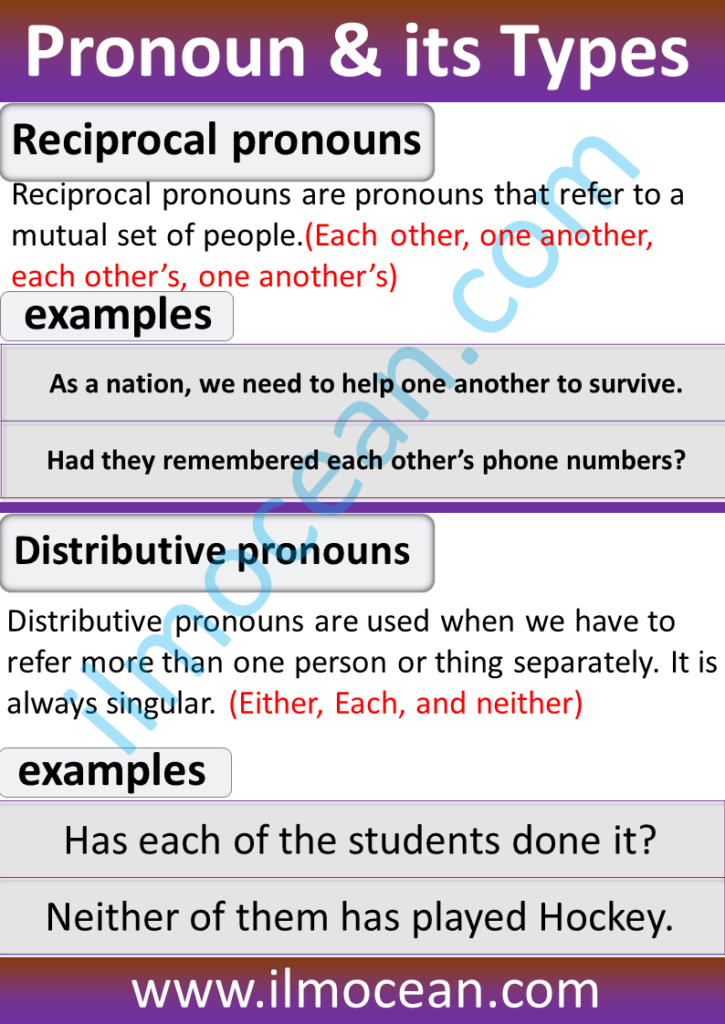